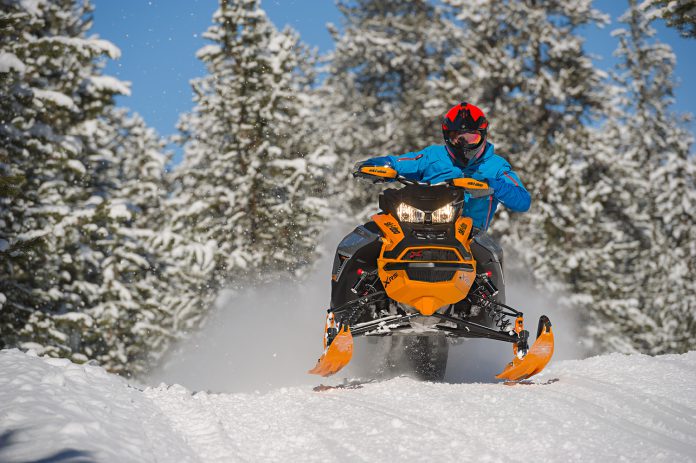 There’s been plenty of scuttle circulating about Ski-Doo’s new 900 ACE turbocharged engine available in almost ever segment of snowmobiling this year.

First we need to explain that the 150-hp rating of this engine is a bit of an understatement.

Although the dynamometer may read 150, the copious amounts of torque this engine generates makes it feel and perform like a much bigger engine.

We don’t have access to that particular torque info yet, but in comparison to 150-hp 2-strokes, this engine pulls way harder and can easily take advantage of taller gearing without an eyeblink.

Although the 900 ACE engine has been around a few years, this version has been considerably beefed internally to handle the extra pressure of the turbo.

It uses new, beefier connecting rods and different pistons with strength added on top where combustion happens and in the wrist pin area.

Naturally there have been adjustments to camshaft profiles, cooling, oil circulation and timing to deal with the estimated 55-horse increase over the naturally aspirated 900.

The big story is the turbocharger itself. This liquid-cooled, oil lubricated unit is wholly manufactured by Rotax and is not an import from another supplier.

The advantage here is that Rotax was able to control the specifications of what was required and did not have to adapt someone else’s design to get exactly what it wanted. We’re told it is engineered to operate in the 100,000 to 170,000 RPM range (that’s a pretty big range).

The turbo is actually mounted within the exhaust manifold very close to the exhaust ports so the compressor vanes can spool much more quickly as engine RPMs increase, thus reducing lag.

The compressed air charge is then routed through an intercooler, dropping the temperature of the compressed air entering the engine (cooler air has more oxygen). Boost is controlled by an electronic wastegate.

For those who are disappointed in Ski-Doo’s claims of 150-hp when the competition are already at 180, be encouraged by the fact the same engine and turbo already make a claimed 175-ponies in production Can-Am X3 side-by-sides.

This evidence tells us the whole story hasn’t been told on this engine and Ski-Doo is carefully field-testing it this year to ensure there are no glitches before it unleashes its full power potential, probably next year, in an all-new model.