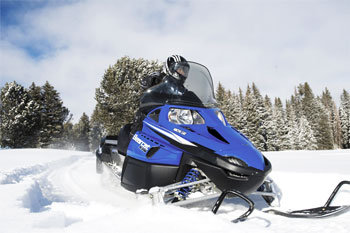 This season we decided to request a sled for our press fleet unlike one we’d normally ask for. Its a Bearcat utility sled from Arctic Cat.

Honestly, it’s a beast and simply put, its HUGE. It boasts a 20-inch wide track, under seat storage, Z1 4-stroke engine and a gigantic bush bar up front just to let everyone know you mean business.

At first, I figured this sled would be reserved for hauling camera gear and possibly for pulling trucks out of the ditch (I’m kidding, though its not entirely impossible for this sled). After the keys had been handed out to the various team members and test riders I found myself in a pickle. I wanted to ride, but the only sled left was the Bearcat. As far as I’m concerned, any ride is better than no ride so off I went. Something happened on that trip that I never expected. I began to like the Bearcat… a lot.

Its a surprisingly awesome sled. For starters, its by far the warmest sled in our fleet as the windshield is as big as the hood of a 66 Coupe DeVille. I’ve always liked Arctic’s Z1 engine and its right at home in this sled delivering smooth, even power. The seat, while super wide, is also very comfortable – sort of like cozying up on your living room couch and, believe it or not, it rides like a DREAM. I can honestly say its one of the best riding sleds I’ve ever logged miles on.

I’d love to tell you that it handles with cat like precision (pardon the pun), but it doesn’t. The wide skis and track seem to work together to provide slightly numb but not unpleasant handling on average speed trails. Verdict; not altogether terrible.

At the end of the day I relayed my impressions to the rest of the SnowTrax and Supertrax crew and they collectively thought I was nuts. Over the course of the next few weeks though, each of them had a turn on the Bearcat like I did and and all walked away as pleasantly surprised as I was.

Even though this sled is purpose built to be a work horse and not a play toy, it does both extremely well. My question to anyone who doubts the Bearcat is simple. If it rides smoothly, its comfortable, quick and handles pretty good, why NOT ride one?

Catch SnowTrax Television weekly on TSN in Canada and on Outdoor Channel in the United States and visit www.snowtraxtv.com to watch full episodes online!