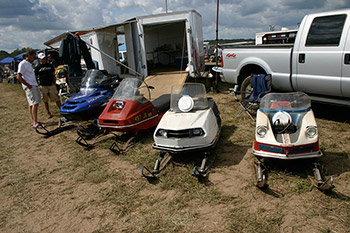 First, let me say this – congrats to the Sno Barons for what I consider to be the best rendition of Hay Days in the modern era. Great traffic and crowd management, great layout of the event, great weather and most importantly – possibly the biggest crowd anyone has witnessed in Hay Days history.

Okay, now the compliments have been filed I do have a couple criticisms.

First, there has to be some way to level the playing field so everyone doesn’t feel an unexplainable urgency to be at the event for sunrise on Saturday AM. Clearly, the desire to get the best deals at the swap meet – before they’re gone by 10:00 AM – fuels this urgency which could only be rivaled by announcing a low level atomic device had been detonated somewhere near North Branch.

The crowds on Saturday were heroic, frankly, unbelievable. However Sunday appeared to be less than half of Saturday’s gate. This is a shame as outside of the Swap Meet junkfest there’s a ton of great stuff to see, do and buy. I have no idea how to level the crowds over both days. I’m simply standing on the sidelines, spending substantial jing to get our display into the event, staff fed, clothed and accommodated all in an effort to meet Supertrax readers and Snowtrax TV viewers.

Missing Hay Days is almost as bad as missing your first ride in early December. The event is so well attended by industry leaders and cognoscenti, most in the enthusiast media cannot risk not being seen there.

It’s an unbelievably productive time to scope out all that’s new, all that’s good and stuff that’s a bit unsavory as well.

In any case, I would like to extend hearty thanks to the droves of readers and viewers who dropped by our booth, watched a few Snowtrax clips, picked up a couple Supertrax mags and bought or renewed their subscriptions. I personally enjoyed every conversation and learned much from all of you.

The Sno Barons will need to have their collective grins surgically removed for the next month after producing an event that is clearly without equal in the snowmobile industry.

Mark Lester
Mark Lester is Co-Publisher of SUPERTRAX Magazine and a regular Host on SNOWTRAX TV.
Previous articleHay Days 2014: Annual Trip To the Cornfield
Next articleARCTIC CAT IS MAKING GOOD USE OF ITS 600