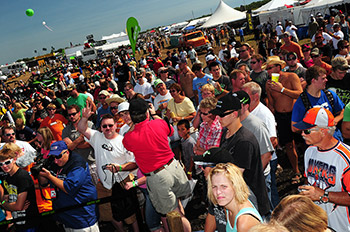 We’re in the middle of packing for the annual pilgrimage to Minnesota for the kick-off event of the snowmobile season – Hay Days.

The Sno Barons’ Hay Days event is now located about an hour north of the Twin Cities (off 35W). Honestly, it’s the must-attend event of the approaching snowmobile season.

Approaching may be an overstatement. After all, it’s only the first weekend after Labor Day and the last weekend of August wass still summer. In any case there’s no pathos for anyone in the media business who misses this important and unusual event.

What’s interesting is how much business goes on before the public is allowed into the jinormous facility. Friday’s an exhibitor-only day and is where the action is before the legion of gate paying, snowmobile hungry consumers show up on Saturday.

Not being at Hay Days can be a real problem if you’re on the inside of the sno-mo-biz. New people are rolled out, new strategies are unveiled and dinners and lunches are served to the media at a rate that’s quite frankly, heroic. If you’re not there, you miss out on one of the best face time opportunites of the year.

So, our truck is leaving with our booth in tow and staffers ready to set it up when they arrive. Supertrax Magazine – the sport’s most widely circulated snowmobile enthusiast publication and Snowtrax Television, the sport’s longest running, most watched snowmobile television series will be on site at our regular location. Our staff enjoy meeting our readers and viewers and quite frankly, it’s a wonderful opportunity for you to be tangible to us and that means everything in this biz.

If you’ve never made the trip to Hay Days, it looks like the weather this year is going to cooperate. We haven’t even mentioned the jibungous swap meet or the all weekend long sno-mo-drags and other forms of motorized mayhem. Hay Days is a gearhead’s paradise and we’re pretty sure you won’t find a single vendor selling deep fried tofu.

These are all good reasons to take in the strangest, yet arguably hands down largest snowmobile extravaganza of the year.

See you on Saturday!