ARCTIC CAT IS MAKING GOOD USE OF ITS 600 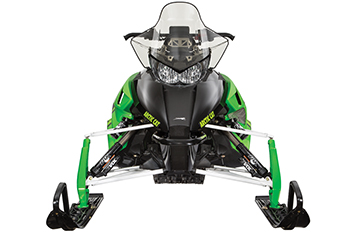 This is the first time Arctic Cat has made a race-ready 600 for snocross and cross-country available to all snowmobilers right from the dealer.

Powered by Cat’s DSI C-TEC2 599cc 2-stroke, the new XC (cross country) version is proving to be all about competing.

Aside from featuring 1.25-inch tracks, these sleds use Fox Float EVOL RC air shocks up front and a Fox 1.5 ZERO C (center shock) and a 2.0 ZERO RC gasser with adjustable damping on the rear arm.

We’re absolutely thrilled to see Cat moving toward damping adjustability and hope it carries over to all production models some day.

If you’ve read about Cat’s RR series, you know these sleds already come with a reinforced skidframe and other race-intended mods to make the sled super-durable and as light as possible in competition.

One thing we’re not up-to-date on yet (we’re still waiting for specifics from Cat) is what is described in the press release as 7-position skidframe coupling. We expect Cat has come up with a new twist on how and when the couplers engage during the skid’s travel.

Although we don’t have specs on the snocross version yet, we noted the XC has a very large 11.7-gallon clear fuel tank for long-range cross country events.

We expect the SX will have a much smaller tank for closed circuit snocross races and to keep the sled’s wet weight as low as possible.