WHAT DROVE SKI-DOO TO USE RAS 2? 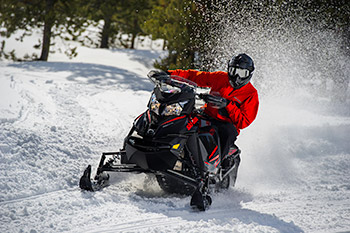 We’ve been telling you for quite some time that the original XP’s razor-sharp handling was almost too-sharp and there was a certain twitchiness to it that could only be completely solved by adding a second runner.

Although we’re only guessing here (something we’re prone to do – and are not too shabby at), we think the original XP front end design had a lot to do with skis.

You’ll recall the original REV (2003-2008) used a concave ski-bottom and dual runners. This excellent design was vetoed because of patent infringement violations and Ski-Doo was forced to go to a new ski-design that didn’t ruffle any other ski-manufacturers’ feathers.

As a result, almost all XP models were shipped with new skis with a single runner on the bottom and owners had to actually drill out the extra mounting holes and install a second skag obtained from the Ski-Doo PGA catalog.

Those original nixed REV dual-skag, concave skis were fairly “soft” in their turn-in and although they resisted darting beautifully, were never what we would call “carvers”.

We’re thinking the change to a more conventional ski (although still a 2-runner design) had a lot to do with the XP’s over-sharp cornering.

Could Ski-Doo have originally planned to use the older, softer turning design and then had to change course late in the XP’s evolution?

Keep in mind there’s a 3-year rollover from the time a new sled is dreamed until it makes final production, so the XP could have been conceived as early as 2005.

RAS 2 may be the “final fix” in a process that has taken almost a decade to get right. The good news is this: The new Ski-Doo front end works great and offers what many would argue is top-of-the-industry handling this year.

Kent Lester
Kent Lester is Co-Publisher of SUPERTRAX Magazine and a regular contributor to this website.
Previous articleARCTIC CAT IS MAKING GOOD USE OF ITS 600
Next articlePolaris and Ride With Chris Brown Adventures