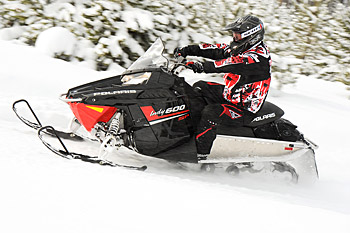 With the re-introduction of the Indy name to its 2013 lineup, we were concerned Polaris might be polishing off this legendary Moniker in an attempt to pry some sales out of a price sensitive segment.

Our fear? Revive an iconic name and tarnish it’s memory with a yawner sled. Thankfully our concerns were totally unfounded The 2013 Indy is a knock-it-out-of-the-park, bases loaded home run.

The Indy repeatedly impressed our test riders all week long in West Yellowstone earlier this month.

Its insane power from the new 2-injector Clean Fire mill in this low friction, 30-pounds-lighter-than-a-600-Shift chassis is not just quick – dudes, this thing hauls donkey.

The 2013 Indy is good to its lineage and it rails corners in a way only an Indy could and can.

The lighter chassis is entirely flickable and downright fun to ride fast. The new parabolic skis are a solid improvement and the long overdue one-piece bars with hookers on the SP are superb.

We suggest shelling out the extra grand for the SP version of the Indy. Its upscale shocks are tangibly better than those found on the base model and there are enough extras that you’ll be more than satisfied with your decision.

One gripe – where are the back tires?