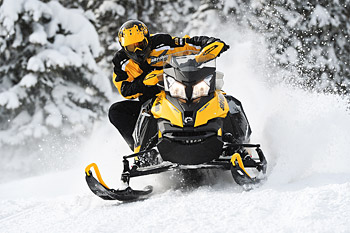 You’ve already read about our Sno-Shoot opinions on the 2013 137-inch Renegade and how well it rides.

We were especially impressed with the 1200 4-stroke (4-TEC) version, although the lighter 800 rMotion Rennie is extremely capable, too.

We had a couple of hours after our 4-day photo shoot and specifically took the 120-inch MX-Z X 800 E-TEC and the Renegade for a lengthy comparison ride.

Here’s what we think. Although the 120 rMotion is a very good riding sled and pretty much matches anything the competition has come up with, we think the 137 is more compliant, more controllable and takes suspension a complete notch higher.

We even compared it to the extremely plush (and expensive) air ride system on the GSX and found it to be “just as good” in washboard, chatter bumps and even in 6-inch deep uniformly spaced bumps that inevitably cause a sled’s suspension to pack up.

Our test riders concluded this would be our first choice for a sled we’d want to ride on ungroomed trails for a long day.

Even with this high praise in stutters and smaller stuff, we found the compliance of the skid was very linear and resisted bottoming and packing in the heavier going, too.

We messed with the damping settings on the front shocks and discovered they were most compliant in the one to three click range (from the softest setting) and with the front end set relatively soft, the marriage between the front end and the rMotion was just about perfect.

Two of our riders, one weighing 190 lbs and the other 245, found the settings didn’t need to be changed back and forth when each was riding, to get fantastic compliance.

Once again, we set the rMotion running board adjusters to full soft and a maximum of two clicks above soft and the spring preload less than halfway on the adjuster.

We were riding pretty aggressively on choppy trails with G-out bumps thrown in with some deep stuff (8-inch plus) and were thoroughly impressed how even the relatively soft settings wouldn’t bottom.

Although the difference between the 120 and the 137 is marginal, we felt the 137 performed better over the full range of trails we rode that day. We’d gladly pay the extra for the longer track.