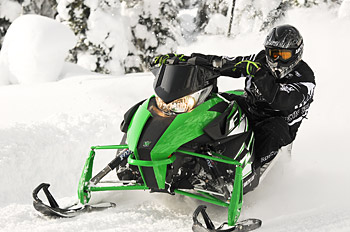 If you found your 2012 ProCross Cat tended to “pack up” about two-thirds of the way through its suspension travel, we may have a fix for you.

We found this tendency ourselves and were a bit frustrated this winter trying to get the skid to use its full travel and take advantage of its shocks’ ability to dampen.

It actually felt like it was bottoming out all the time – a tendency we never experienced at all on the early 2012 Cat protos we rode a year ago.

This was especially noticeable on Sno-Pro models where there are no damping adjusters on the skid shocks and the calibration seems to be overly stiff anyway.

Our LXR press sled did the same “packing thing” but because the shocks are set to be more compliant, we could live with it much better. Still not as good as we knew it could be!

According to the Cat engineers, here’s the fix: Apparently, the 128-inch track on the Procross tends to be too tight. Since the track doesn’t have enough deflection when set at what would be normal adjustment other years, when it gets past the halfway point in its travel, the track goes way tight and resists movement through the rest of its travel.

If you’ve noticed this stiffness (almost like the sled is bottoming out – call it “soft bottoming”), you need to back off your adjusters so the track is hanging down 2-inches with 10 pounds pressure measured halfway down the rail.

Make sure you’ve set your pull scale from the center of the track, not the outside edge, when measuring deflection.

Apparently, a looser track allows the ProCross skid to deliver everything you paid for.