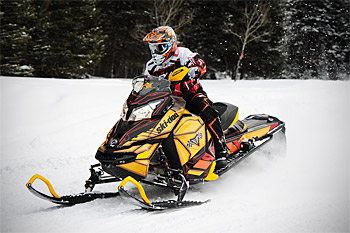 After our first exposure to the new Ski-Doo XS body work we were left maybe just a little wanting.

The new look is better, works better and is over-all a good move. However, it’s more about sizzle than steak.

The steak though is about to be served and it is the new rMotion 137 skid used on the 2013 Renegade fleet.

Let’s keep this short and sweet – the best riding snowmobile we’ve ever ridden was any of the 2013 Renegades (600 E-TEC, 800 E-TEC and 1200 4-TEC) just a few weeks ago in West Yellowstone at the manufacturer’s Snow Shoot event.

Our crew was able to capably power through enormous chatter, huge moguls and mine fields of bumps at speeds exceeding any other sled and remain in complete control.

Simply ridiculous and almost unbelievable is the best way to describe the rMotion’s ability to eat trail junk.

When it was all said and done the new rMotion 137 skid gets the highest praise from the Supertrax crew and we simply can’t wait to run a full season on a 2013 Renny.