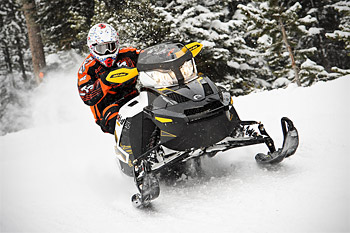 We got some negative feedback on our article a while back [ IS WEIGHT STILL THE ISSUE? ] commenting on the fact snowmobilers are still weighing (no pun intended) in on sleds that are as light as possible when making buying decisions.

It seemed like a pretty cut-and-dried commentary but one reader wanted us to define more clearly what a “light” sled was or is.

Without sounding insulting, we would define a light sled as one that weighs less. There.

Seriously, the reason the editorial was written was because of some recent industry data we had been exposed to that stated light weight was about fifteenth on a list of desirable features new-sled buyers wanted when choosing a new ride.

We were pretty stunned by this because it was 100-percent opposite to the feedback we had been getting and frankly wondered where the info was coming from. It spurred us to poll some of our readers and to gather as much data as we could about what makes people choose certain models.

Turns out, our research, based on info we’d been gathering even before the above statement was made, was consistently telling us snowmobile buyers were strongly influenced by the weight of a sled they were considering. On the other hand, if a sled had a reputation for being heavy, it counted as a negative.

This info varied depending on the class of snowmobile a buyer was shopping. For instance: A touring sled buyer was less influenced than a pure performance prospect.

Likewise, a buyer would negate the extra weight on a long track sled over a short tracked one because they wanted the deep snow advantage and didn’t care about the extra weight it carried in the track.

The biggest holdback in making a decision to buy a 4-stroke was the weight factor and the belief it would impede handling and ride – a factor we see as being less of an influence than a couple years ago.

The fact is, weight is still extremely important when checks are being written – and consumers are ever more aware of it as a factor when opening their wallets.