FIRST PULL: 135 KLICKS ON THE VIPER 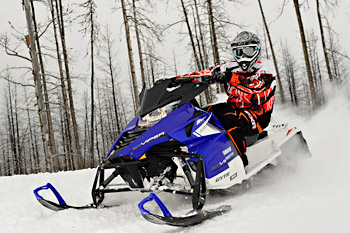 I just had another monumental ride – on a production 2014 Yamaha Viper LTX at sea level.

The freshly minted production sled needed about 50 miles (80 kms) to “free-up”. Honestly, it felt a little laggy and the clutches seemed reluctant to shift hard until the 50-mile mark, then the sled began to lay down rubber on white top.

The marriage of the superb 1049 Yama-triple to this chassis feels pretty doggone good. Not only was I impressed with the strong on-center feel and progressive, clean bite on initial turn-in but I was pleased with the sled’s low CG feel.

The 137-inch track had no adverse effect on handling that I could discern on early season snow. It felt good in the ditches – not at all like a 4-stroke was underhood.

Body movement capably countered any sidehill leaning and the sled soaked up buried objects under the minimal snow with ease.

I was pleased to find the sweet melody of the 1049cc, triple throttle body mill completely intact. In fact, it’s safe to say the Viper sounds just as good as the Nytro – and people behind you will not be complaining of exhaust fumes at head level – something high exiting Yama-pipes are known for.

The entire 84-mile ride the sled never sneezed, coughed or failed to do anything but start and run smooth. Once past 50 miles, shift RPM settled in at 8300-8450 which I think is just about right for this engine.

I suspect the Yama-spec clutching is conservative. I would like to see a little less weight in the primary for a more revy upshift and maybe less cam in the secondary to take advantage of it.

Here’s the deal: The Cat’s ZR 7000 version has already impressed us with its aggressive clutching and I suspect the Viper’s big end is suffering because of clutch calibration.

The good news is this: There’s 8-inches of ice on the lake here at Supertrax/Snowtrax World HQ and as soon as our ZR 7000 lands we’ll be putting it head-to-head with the Vipe to verify if our suspicions are justified.

Any Yama-groupie with experience, particularly with the 1049 triple, is gonna love this sled. While inevitable comparisons to Arctic Cat’s ZR 7000 will be repeated over and over all season long, I couldn’t help but wonder how the Vipe will fair against Ski-Doo’s 1170cc 4-TEC MX-Z and Renegade.

Frankly, I found myself thinking this just might be one of the best 4-strokes I’ve ever ridden – and I really don’t like 4-strokes that much.