FINALLY THE SNOW HAS COME TO ONTARIO! 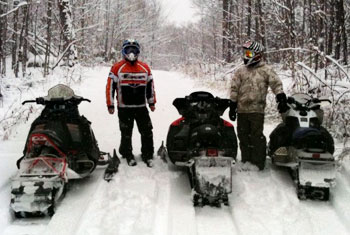 Well, its been a long wait, but the snow has FINALLY come to Central Ontario and more specifically, Haliburton County! It hasn’t snowed a lot, but don’t get me wrong, the ground IS white!

Here at SnowTrax, we don’t need much snow to get those first few miles on. I don’t mean to brag, but we do get free carbides and I feel no guilt scratching off the stockers on those first few runs.

For starters, the trails just a bit further North of the SnowTrax compound were covered in at least 14 inches of heavy snow. The lineup of riders and sleds consisted of me, Motorhead Mark (Publisher of Supertrax International), my brother AJ and our buddy Jordan.

We were riding a Polaris RUSH, a Dragon 800 Switchback, a Ski-Doo Backcountry X and a Yamaha Nytro (I’ll report on all of these in an upcoming editorial as well as on the show). The leader probably got the best ride and the freshest snow, but the sleds further back were actually getting pretty a smooth ride over well packed snow. Very realistic conditions and very little scratching with only the occasional rock hit.

Honestly, it was SWEET and after a long summer, I really needed to pull the trigger on 120 hp.

Outside right now visibility is almost at zero. The kids are all home from school and the snow is piling up at giggle-inducing rate.

I see way more miles in my near future and this is one of the many reasons I love living in Ontario.

SnowTrax Television returns to Outdoor Channel in the US and TSN and TSN2 in Canada in December. Visit SnowTraxTV.com for more.