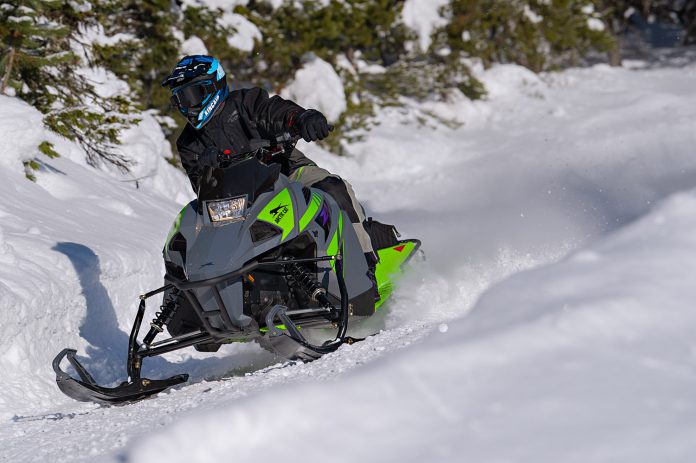 If there was ever a year to expand the snowmobile market, this is the one.

Frankly, after the numbers are tallied this year, it’s strongly suspected the snowmobile marketplace will have experienced some pretty impressive growth.

Many riders who haven’t been using their sleds or who have gotten out of the sport are either dragging their old blisters out of barns or shopping the internet to find something – anything – they can ride this winter.

The reason? They’ve been cooped up for months, and all plans for a cruise, southern holiday or a month at the spa have disintegrated. There’s been little money spent or set aside in advance for airline tickets, hotels, resorts or for condo rentals in the southern or island sunshine this winter.

Yes, there is unemployment and there are social issues that may restrict universal spending, but, fortunately, the snowmobile demographic tends to be quite mature, wealthy and secure. So where is the money going this winter? You guessed it; it’s going onto the snow.

We’re not just making a stab in the dark here. We’ve been observing a marked increase in the sale of all recreation vehicles since last April. Used stuff is really in limited supply and most dealers are sold out of new equipment. ATVs, Side-x-Sides, PWCs, boats, motorcycles – you name it. Supply is short and demand is high!

This year brings a gold-plated opportunity for the OEMs to get new snowmobiles into the hands of hungry consumers. Certainly, what 2021s are built now is pretty much all they can supply. However, next year is a different matter. We think the spillover demand for new equipment for the 2022 model year will be staggering. Why?

Simply, there’s no guarantee society will be 100-percent free from the pandemic by next season. Although we’re hoping (praying) it will have ended, it’s going to take some time for consumers to get enough confidence to go back to the sunny-holiday mentality.

Even if it ended by the beginning of snow season this year, we think a multitude are not going to take any chances travelling south and, besides, getting back into it, they’ll likely re-discover snowmobiling is an incredible blast!

What should the OEM’s response be to this development? First, to their credit, the response has already begun. We believe the demand for value priced sleds will go off the Richter scale next season. Ski-Doo has already introduced a down-priced line-up of Sport rated 600 EFI sleds that will be in increased demand next year.

Sleds like Arctic Cat’s Blast, Yamaha’s Venom and the Polaris EVO are more on-target than ever. All four OEM’s should consider adding more of this kind of value priced equipment to their brochures.

Summing it up, it’s almost like a reverse engineering of what has made snowmobiling work the past couple of decades. For years it’s always been about more power, more displacement, faster and faster.

This current situation may open the door to a new way of perceiving snowmobiling. Both new and rejuvenated enthusiasts may demand tamer sleds that are warm, comfortable and priced low.

Yes, inevitably performance will eventually enter into the equation. Right now though, it should be all about meeting the needs of a newly reborn marketplace!