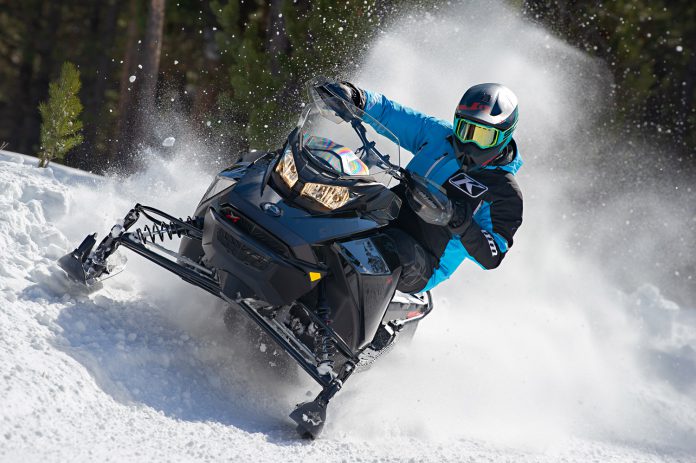 Ten years ago trail sleds were pretty much locked into 1.25-inch lug depth tracks on any sled from 600ccs up. Today, with the availability of 160-plus horsepower 2-strokes and 180-plus horse 4-strokes, lug depth numbers are increasing into the 1.5 to 1.6 inch deep tracks.

It’s not a complete lock using these depths, as many manufacturers are still offering base equipped sleds with 1.25s or less and bidding you to early-order a new sled with the deeper numbers as an option or at least a swap-out on credit for the stock 1.25 with an upcharge for the deeper one.

After being exposed to these deeper tracks for a few years, we can really see the value in going deeper. The benefit goes beyond mere acceleration and traction and actually extends to far better braking. Yes, there’s actually a safety upside to having a deeper track – and it’s immediately noticeable.

On trail sleds or even on Crossovers, it’s a fact there is a slight penalty in top speed for going to a deeper lug depth. A 1.6-inch track weighs more and uses more power to rotate versus, say, the one-inch lugged track on Yamaha’s SRX.

Why? In order to support the extra lug depth 1.6s have more laminations and tend to resist rotation more than a 1.0 or a 1.25. Another issue is “packing”. These deeper lug tracks actually pack the close-off panel at the front of the tunnel with air which generates measurable parasitic drag and consumes HP.

Since the 1.0-deep SRX is built for the sole purpose of impressing your riding buds out on the lake with the sled wound out to its maximum, yes, there is the deficit of not being able to quite get the extra two or three mph your friend’s one-inch deep SRX is getting.

However, on the trails, you’ll likely run away from the stocker unless it’s fully studded. Once again, they’ll be adding considerable mass with steel traction equipment, so it may be a draw.

The decision high performance trail riders are forced to make is this: Do I want maximum top speed on packed powder lakes – or do I want maximum acceleration due to stellar traction on the same surface?

If you’re riding on ice – forget about it! Even a 1.6 won’t stick that well; the only solution is to go with a full set of studs.

With Crossovers, it’s a different situation. Most are offered with minimum 1.35 to 1.6-inch tracks and the whole idea is to get the best trail use while getting the sled to work adequately in powder. Top speed isn’t a priority.

If you’re thinking about upgrading your Crossover to a 1.75 or even a 2.0 track, you need to give it some serious consideration. Although you’ll gain some sweet bite in powder and be able to climb more like a vert sled, that extra track depth will tear up the trails you’re riding and not put you in a love situation with your grooming club.

Yes, you will gain a lot of extra deep-snow traction and bite from a 1.75 or up track, but you will get more slider wear on minimum snow-cover surfaces like lakes and hard-packed trails.

Once again, your decision on what track depth to invest in is up to you. It all depends on the type of riding you do and what kinds of surfaces you ride on most.

Supertrax Onlinehttps://www.supertraxmag.com
Check back frequently for new content and follow us on social media!
Previous articleWAS THE MATRYX NECESSARY?
Next articleEXPANDING THE SNOWMOBILE MARKET