WAS THE MATRYX NECESSARY? 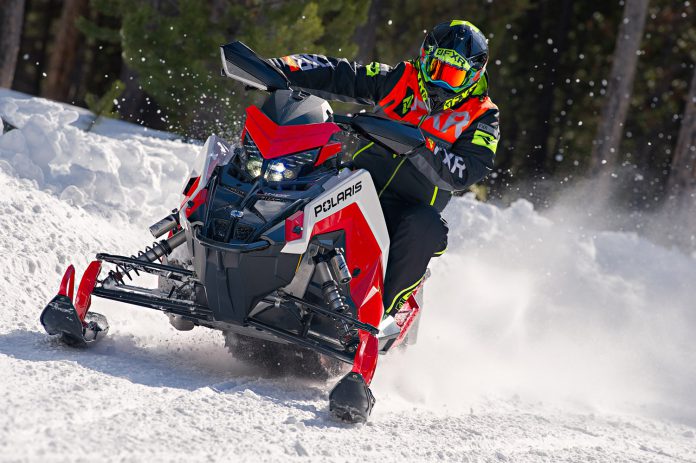 I guess the question we’re asking here is this: Did Polaris really need to come up with a replacement for the AXYS?

Frankly, the AXYS, powered by the company’s 850 twin, was and still is a huge force to be reckoned with. When it comes to mountain and powder-targeted sleds, this combo is pretty much unbeatable – even in 2020 – when comparing weight, power and handling to any of the competition.

However, although it won’t be this year, certainly at some time in the future Polaris’ vertical sleds will undoubtedly become Matryx-based snowmobiles.

Looking at it on the surface and trying to draw conclusions on why the Matryx was introduced in what seemed to be the middle of the AXYS platform’s hayday, we’ve had to give the answer a lot of consideration.

Frankly, we’re pretty sure it didn’t have anything to do with handling or riding flaws with the AXYS. It’s pretty much at the top of the industry in those categories, especially when it comes to handling. It may be a skinny second to Ski-Doo’s rMotion when it comes to ride quality – but it’s certainly not far off the mark in head-to-head comparisons. The shortage, if any at all is likely due to calibration, not some inherent shortfall with the AXYS chassis.

When you look at weight, it raises more eyebrows. The AXYS is still the industry leader for lightness. Maybe the Matryx is a tad lighter (not confirmed yet) but the AXYS RMK and Assault 144 have led their categories in lightness for a few years decisively taking that advantage away from Ski-Doo.

Here’s what we’re thinking. Polaris has been on the hunt to increase market share beyond Ski-Doo’s stranglehold since before SD’s G4 chassis was introduced. Looking into the crystal ball, we believe Polaris felt by the end of the G4’s run, any new Ski-Doo (G5?) could possess the lightness and handling upgrades necessary to possibly equal Polaris.

Keep in mind, it’s always easier to raise the engineering ante when the model of what you want to exceed is clearly before your eyes. This was the case with Ski-Doo. It could see where it needed to go and would potentially be able to come with a Polaris-beater any time before the AXYS was finished its run.

Same goes for Arctic Cat. Cat’s mountain and deep snow sled program has been very aggressive, and Polaris knew it wouldn’t be long before there was a new ProCross II chassis coming out of Thief River Falls. Undoubtedly, it would be as light as the AXYS, would handle as good or even better and ride with the same level of comfort as the G4 or the AXYS.

Sure, the difference wouldn’t be blinding and the AXYS would still be competent, but how many riders might walk away from Polaris showrooms and buy something just as good – maybe even better – from Ski-Doo or Cat?

It’s all about planning and taking aim at the competition. Not necessarily where the competition is right now – but rather – where it’s going to be a few years down the road! Thus the Matryx!