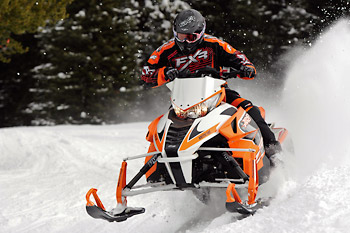 It’s not new news anymore that Cat and Yamaha have formed an agreement together to share in chassis and engine development.

However, this makes for some pretty incredible opportunities for AC to get into some markets it hasn’t had strength in before.

Example? Yamaha has a menu of great 4-strokes, not the least of which is the already-in-use 1049cc triple used in the ProCross 7000.

However, two Yamaha engines that could be put to use are the Apex 998cc 4-cylinder and the 500cc twin used in the Phazer.

By utilizing the ProCross platform in different track lengths and variations, the 500 4-stroke could be used as a trail-happy mid-range sled in the 80-hp category or used to power a line of super-economical utility models.

The 998 4-cylinder is a different matter and its wider dimensions may not fit inside the ProCross bulkhead without creating a completely new front design.

Frankly, we wouldn’t bet against Cat shoe-horning this great mill into one of its sleds. A year ago no one would have guessed the 1049 would fit in a Cat chassis but the company is extremely resourceful and when it gets an idea, it knows how to run with it.

Then there’s the whole thing with Cat’s 2-stroke program. Yes, the company needs to use C-TEC2 in more displacement categories. Building a DSI 800 is almost a no-brainer – but think about this one: What about a 570 with C-TEC2?

Think about it. So far all fan-cooled 2-strokes in the industry fail to comply with EPA regulations.

The fairly economical-to-build C-TEC2 system would enable Cat to come out with the first EPA certified fan-cooled line of sleds for utility and trail use.

Not only would the pricing be way cheaper than using lower horsepower 4-strokes but it could open doors for Cat to get into new markets – much like Polaris is doing with its fan-cooled Indy series.

Kent Lester
Kent Lester is Co-Publisher of SUPERTRAX Magazine and a regular contributor to this website.
Previous articleMore Ski-Doo Engines – and Soon!
Next articleIs There Room For Another Snowmobile Brand?