Is There Room For Another Snowmobile Brand? 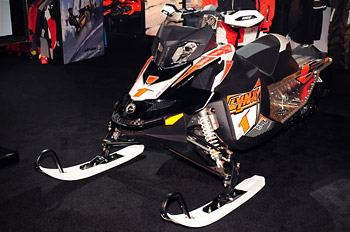 Our crew just returned from an exclusive tour of BRP’s impressive manufacturing facility in Finland. To say our guys were impressed is an understatement of heroic proportions.

This is where BRP builds the complete Lynx snowmobile line and some utility models for Ski-Doo and the sophistication, attention to detail and quality at this plant is amazing.

Let me seed your mind. Lynx is the number one selling snowmobile in Europe. Interestingly, Lynx participates in and is highly successful in European Sno-X racing.

Euro snocross is considerably different from what we see on this side of the pond. Our version is better compared with motorcycle Supercross while euro snocross is more similar to natural terrain motocross.

It’s no secret North American snocross has been struggling with both participation and spectator attendance the last five years. While this has been going on, a significant rejuvenation of interest in Cross Country snowmobile racing has emerged.

Legendary stories associated with events like the International 500 Winnipeg to St Paul XC are capturing the imaginations of a significant group of participants.

Here’s my point. Lynx snowmobiles are crazy good on natural terrain; in fact they rock. They’re very similar to Ski-Doo XS and XP models; the drive train is actually identical, however the rear suspension is completely different.

Lynx uses a skidframe called PPS, which stands for Pauli Piippola Suspension. Paulie Pippola is a real guy at Lynx and his suspension is the bomb for rough terrain. Since its introduction in 2006, PPS has evolved to 9 variations and spans the entire Lynx snowmobile lineup.

Let us paint a clearer picture: What if BRP brings Lynx to North America and uses Cross Country racing as its only venue, leaving Ski-Doo to compete in snocross.

The two brands never end up nose-to-nose but they cover both disciplines like a blanket. BTW, which form of racing do you think consumers identity with?

Our guys were profoundly impacted by this reality while in Finland. The Lynx brand is built tough and looks unique as a result of slightly different bodywork on some models when compared to Ski-Doo.

Their crossover models are not 137s but rather 144s. The brand is techy, imposing, and we think has the potential to immediately garner the cache (to North Americans) of an upscale import car – think Porsche or BMW.

While this diatribe is mostly idle musing about something we think is pretty cool, do you think North American’s would be attracted to the Lynx brand if made available on this side of the globe?