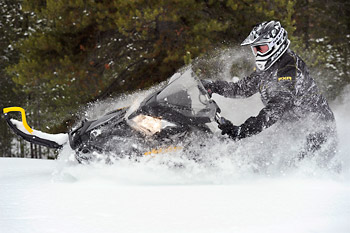 Ski-Doo’s been leading the industry with great direct injected 2-strokes and some truly innovative developments in 4-stroke snowmobile power, too.

Frankly, the company is so far ahead of everyone in 2-stroke technology, it could leave everything the same for the next five years and still be leading.

There’s always a wrench thrown in somewhere though and Arctic Cat has come up with a new 600 C-TEC2 engine that may outperform Ski-Doo’s DI engines in more than one way. The jury is out on this but from what we’ve seen so far, the new DSI Cats are doggone good.

So would Ski-Doo go to a different version of E-TEC in the near future? We think the technology already exists and its called E-TEC II and is used in the outboards built in BRP’s Evinrude Division.

As far as 4-strokes go, we think Ski-Doo’s been working on a high performance 4-stroke program for about two years now. It’s 1170cc triple is an incredible engine and with the largest displacement in the industry and only one throttle body, is certainly very under-stressed.

We think this mill could safely and easily put out 150-plus ponies without supercharging or turbocharging. The question is, would a revamp up into this range be enough for the adrenaline-charged masses? We think the goal line is closer to 175-hp and that would mean supercharging.

Here’s another one: The new 900 ACE with a turbo could easily hit the 150-hp mark. After all, Polaris gets 140 ponies out of its turbocharged 750cc Weber twin and this engine feels as strong as any hypersled we’ve ever ridden.