Changes to the RUSH Front End This Year 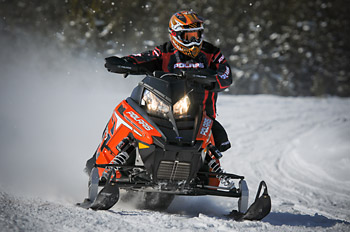 For MY 2012 Polaris has changed the spindle angle (rake) of the RUSH front end including all the 121-inchers.

There’s a new extruded spindle with a slightly repositioned saddle bolt to round out the package.

Supertrax readers know we’ve had lots to say about RUSH handling. We’ve found the sled to be very stable and on-center, offering predictable and linear turn-in and easy to control ski-lift at the edge of carbide grip.

With changes made to the 2012 121 and 136 RUSH models, steering effort is markedly reduced while understeer at the edge of adhesion is pretty much indiscernible.

Also, ski lift when at the limit, becomes even easier to control, allowing the pilot to re-plant the inside ski at will with simple throttle modulation and steering inputs.

It all adds up to an even better handling RUSH and contributes significantly to the aforementioned transparency of the 136-inch shoe on the new Switchback.