Cat’s Crossover Focus and The 2013 CrossTour 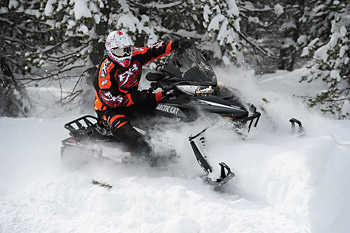 Arctic Cat had amazing success with its new ProCross XF crossovers last year and nearly sold out their availability by late December 2011.

Although all XF engine configurations remain the same for 2013, Cat has changed the gearing on these dual purpose sleds so they can pull higher top speeds – and the increase is significant.

The new gearing will allow 2013 XFs to run very close to their F-Series siblings down the lake – and that’s pretty fast!

XF models with the LXR designation will continue to use the same uncoupled skidframe with coilover Fox Zero Pro shocks while the Sno-Pro XF series will utilize a Fox Float 2 air shock on the rear arm and a coilover Zero Pro gasser on the front arm.

A 1.25-inch track is used on the LXR while the SP gets a 1.50 Cobra. Up front, the LXR relies on Fox ZeroPro gassers and the Sno-Pro stays with Fox floats. Electric start will be available on any 800 2-stroke XF model.

For 2013, Cat has introduced a completely new models series called “XF1100 Cross Tour”. These sleds are targeted at long distance trail riders who may want to go off-trail occasionally or even carry an extra passenger once in a while.

Powered by choices of either of Cat’s 1100 4-strokes (EFI or Turbo) these sleds feature a 141×1.25-inch track, a 5.5-inch handlebar riser, mirrors, electric heated seat, warm mid-height windshield, cargo rack and a set of custom storage bags at the rear and at the handlebars.

An optional 2-up seat is also available and Cross Tours use Zero Pro shocks up front and a Fox Float 2 air shock on the rear arm of the skid.

The Cross Tour is an interesting development and one that squares nicely with Polaris’ Switchback Adventure and Ski-Doo’s 137-inch GSX SE.

NEXT: Read about Cat’s changes to its new Pro-climb sleds!