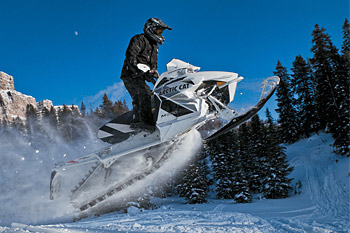 Without question, the mountain market has been weighing huge on the minds of snowmobile manufacturers the last couple of years.

Polaris has simply dominated on this turf and now, with the advent of some very serious 2013 mountain sleds from Ski-Doo, it looks like Arctic Cat is going to raise the ante and put even more emphasis on this sector.

Last year’s newly revealed Pro-Climb sleds were a big hit and although mostly untested, sat favorably with mountain riders who sampled them.

The 800 2-stroke versions were especially taken seriously because of their low weight and impressive big-end power.

The Turbo fulfilled the longings of those straight-ahead riders who were focused on high-marking and wanted to avoid the unreliability of adding aftermarket turbo kits to their brand new sleds.

Certainly, most ultra-serious climbers look at the Cat’s stock 177 hp output as a starting point but there are ways and means to get the pony level higher on these sleds only mountain men will reveal.

Cat’s HCR Hill Climb Racer is its most serious effort ever. Available in both 4-stroke Turbo and 800-2-stroke iterations, the HCR features a vertical telescoping steering post and a 155×2.6-inch PowerClaw track.

Ski-stance is 42-43-inch adjustable and new deeper keel skis are included. A combo of Fox Float 2 and EVOL shocks are used.

Float shocks front and rear are standard. New this year is a vertical steering post and a narrower 38-39-inch adjustable ski stance with 6-inch wide skis.

Cat has gone with an 80-durometer rubber compound for most of its mountain tracks and this enables better grip with less length.

This may be Arctic Cat’s most serious foray into the mountain market ever with sleds that are truly light, handle in deep snow like no other Cats before them and have a great list of strong running powerplants to offer vertically inclined riders.

Staff Report
Previous articleCat’s Crossover Focus and The 2013 CrossTour
Next article2013 YAMAHA: Big Y Looking for Converts In MY13