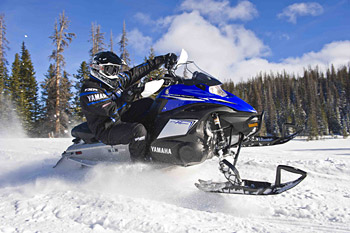 Yamaha has been working hard the last three model years bringing its Apex and Vector product offerings into line.

Certainly the biggest development with these models has been the across-the-board use of Electrically Assisted Power Steering (EPS) in the Venture GT, Apex and Vector.

Recent adjustments have been made to front end geometry, particularly at the point where the skis are mated to the spindles and a rethink of the skis themselves to remove twitchiness and darting on trails.

The end result has been highly successful at keeping Yamaha buyers pleased and loyal to the brand. Perhaps those efforts have not been as successful recently at converting other-branded riders of 2-strokes over to the Big Y.

This year, Yamaha has breathed some new life into its Nytro line-up to make a stab at getting new converts into the fold.

The extremely rider-forward platform hit the market in 2008 with a huge blast and it looked like Yamaha had convinced the masses a lightweight 4-stroke could do everything a 2-stroke could.

Unfortunately, the handling of the newly introduced Nytro was not what the public expected and owners were puzzled how to get rid of the sleds’ nervousness on trails.

In 2009 a pretty comprehensive fix and redesign program alleviated the problem and the last few years the Nytro, although remaining fairly stagnant in sales, has secured a loyal and enthusiastic following.

For 2013, Yamaha has focused on the strengths of the Nytro and sharpened the dagger to reduce steering effort and add to handling precision.

This year, new dual-keel skis with a selection of skag and carbide combinations appear to have eliminated the Nytro’s handling issues.

Supertrax has tested these new skis on an EPS 2012 Apex and frankly, we were blown away at how well these skis remove the darting issues and even more importantly, truly improve the turn-in and predictability in cornering.

All Nytros will get the dual keel skis for 2013 and a weight reduction of “about ten pounds”. Most of the weight diet comes from using lighter gas shocks up front, a lighter RipSaw II track and thinner torsion springs on the rear arm. Actually, the new skis lop off about two pounds, too.

Certainly, with the competition stepping up in the 4-stroke class the last couple of years, it behooves Yamaha to make the very best of its product line.

The Nytro may be the ticket to getting the attention of snowmobilers shopping the performance 4-stroke market.