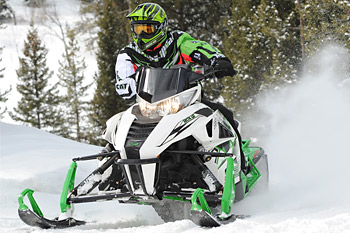 After a blockbuster year in 2012, Arctic Cat is going a bit slower with new products in MY2013.

Makes sense because there were some glitches last year that tarnished the new ProCross and Proclimb Cats’ first impressions and created havoc for dealers trying to hold the Arctic Cat banner high with owners who had purchased the new iron.

Overall, though, the new platforms made a stellar impression and, for the most part, delivered all the Cat faithful had hoped for.

For 2013, the reverse drive operation problem on the 4-strokes has been solved once-and-for-all and the F800 LXR and F800 Sno-Pro owners who wanted electric start will get it.

It seems like it always takes a year for the bugs to get worked out when a completely new model is introduced and we think, in the big picture, the performance, ride-ability and handling delivery of the new Cats will make up for any first-year problems.

Arctic Cat is sticking with its same engine configurations for another year: The throttle body EFI 800 2-stroke, the 4-stroke naturally aspirated (EFI) 1100 and its angry sibling, the turbocharged 1100, plus the 570 fan engine.

The durable EFI 500 twin will still be offered in several models including the cross country targeted 500 Sno-Pro (still in the same chassis as last year) and the Twin Spar 500 LXR.

There’s a new ProCross series being offered this year called RR. The “Race Replica” series, only available with 800 2-stroke and 1100 Turbo power, is aimed at the hardcore ditch and high speed ungroomed trail runners who want anti-bottoming, firm suspension compliance and all-out racer appeal with plenty of suspension adjustability from front EVOL X shocks and Fox ZERO X piggybackers at the rear. Obviously targeted at the Ski-Doo X-RS customer, this will be a very serious piece of equipment.

By offering an optimum sled like this, Arctic Cat is allowing itself to tone down the stiffness of its popular Sno-Pro sleds and make them more palatable to a wider segment of riders.

We felt last year’s ProCross SP Cats were oversprung and over-damped and offered very little adjustment – so hardcore we strongly recommended buyers order the much plusher and more spine-friendly LXR. We still stand by this and will comment after we’ve ridden the 2013s.

One thing’s certain. Last year Cat owned the lakes for high-end performance with both of its big-hp engines.

We think 2013 will present a much more evolved series of snowmobiles that will still lead the industry with power and acceleration.

Next: Find out about the new CrossTour! Check back soon!!