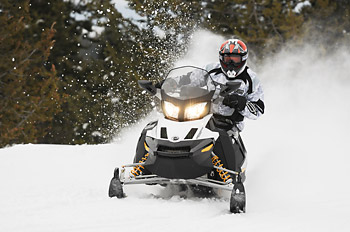 One of our crew just returned from a big mile trip in Quebec (1,500 miles in 5 days). He was with a group riding mostly current year 800cc 2-strokes and he stressed the fact the trails were fantastic and the velocities were less than conservative.

He noted, on one particular day, there had been about 5-inches of fresh fallen snow overnight and the group forged on despite the new snow on the trails (and why wouldn’t they, you’re asking?).

On this particular day, since the throttles were being opened up a bit more and there was resistance to the fresh snow, oil consumption on the 2-strokes was surprisingly high.

As a matter of fact, on this particular day, the 2-strokes consumed nearly four liters (four US quarts of injector oil of the expensive fully synthetic variety required by the manufacturer). That one day of riding alone tallied an oil charge of just under $80.00 taxes included.

Certainly, oil consumption was high on that particular day given the weather circumstances, but the sleds were normally consuming about 2-liters when the trails were rock solid and groomed smooth (based on a 300 mile day).

This amounted to a total oil bill of about $190.00 for the trip. Guess how much the 4-stroke sleds spent on oil on that trip. Yeah, can you spell zero dollars?

Granted, most of the 2-strokes got exceptional gas mileage, probably even a bit better than a 4-stroke in those conditions, however, the extra oil cost certainly put a damper on the whole budget thing. Got us thinking about how much a big-mile rider would spend in a whole year.

Yeah, we know – a lot of 2-stroke owners would argue they don’t care about the extra oil costs and “If you can’t afford to pay, don’t play”. The fact is, though, what if you had 4-strokes that matched the 2-stroke weight and handling advantage even more closely.

As it is right now, some of the 4-strokes in the marketplace are getting doggone close – and a lot of riders we talk to this year who we never dreamed would consider a 4-stroke five years ago – are seriously looking into them today.

You can argue this all you want but don’t shoot the messenger. We’re only commenting on what we’re hearing.