CAIN’S QUEST: One of the World’s Toughest Races 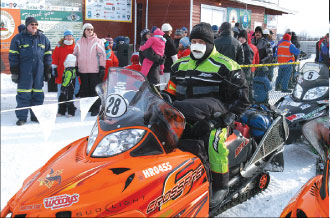 Although Labrador traces its roots to the early Vikings, the earliest recorded explorers were the Portuguese in 1498. But, it was on one of Jacque Cartier’s many trips to North America when he called Labrador: “The Land God Gave to Cain”. Hence, the reason behind naming one of the world’s most grueling cross-country snowmobile adventures, Cain’s Quest.

The race distance covers 2300km (1426 miles) and is entirely run cross-country from Labrador City to Churchill Falls, Makkovik, Postville and Goose Bay, then back to Labrador City.

The length of the event is measured in days, not just hours or minutes, although winners are decided on best times to checkpoints and every hour and minute becomes critically important.

March, 2008 saw 27 teams of two from all over North America assemble to try and tame this rugged terrain. All were fighting for a very substantial $50,000 monetary award, but more important, the bragging rights that come with being dubbed the winner of the Cain’s Quest Challenge.

27 two-man teams entered but only 14 finished. It gives some insight into the kind of challenges these seasoned racers were faced with. As in any long distance race over snow, there were a variety of mechanical failures, but it would be ridiculous to gloss over the significant physical hardship endured by the participants.

Safety played an incredible part in the planning and running of this event with helicopter support, GPS locating and tracking devices on every team. Also, Labrador West Canadian Rangers were posted along the route, providing their assistance. However, as a participant, you are given a map, GPS coordinates of the checkpoints and essentially, that is it for the timing of the route.

As a team, you are able to select the cross-country route you think will be the fastest, most successful way to get from point A to point B. Sometimes, the most direct route is not the fastest.

Because the start occurs just outside Labrador City, it’s the one and only time the racers get to operate on closed White Wolf Snowmobile Club trails. Unfortunately, the start was not without drama for the team of Bill and Bunk Boisvert from New Hampshire.

Within five miles, Bunk had the misfortune of encountering a group of native hunters returning with a sleigh full of caribou who were not aware of the race and the fact the snowmobile trails were closed. The snowmobile fared much worse than Bunk, although after a hospital stay and 12 stitches, he was able to come back and participate in the race.

Considering the condition of the sled, for a normal participant, the race would have been over but his team had brought a third complete snowmobile in its support trailer. It took about eight hours to dismantle and replace the damaged parts on the sled – almost perfectly coordinated with Bunk’s hospital stay. Later that week we were completely shocked to see them finish in third place overall on this grueling adventure.

Another near legendary participant in this event had thrown two sleds in the back of a pickup truck and driven all the way from Idaho. Rex Hibbert (Kirk’s brother) and Paul Dick, names synonymous with Arctic Cat racing, had simply gone by the factory in Thief River Falls, Minnesota and picked up two pretty standard issue Arctic Cat Crossfire 600s to compete in a race that was dominated by 800cc and higher machines.

The benefit on their side was the fact they had competed in some of the biggest cross-country snowmobile races in the country and felt that this was ‘just one they had to see’. Hibbert and Dick managed to compete in the top five for the entire race and it’s especially amazing considering the bottomless snow conditions and the fact that, in this race, horsepower is your best friend!

The eventual winners of the race, Gerard Rumbolt and John Efford, were from Labrador City and had custom built their own Yamaha Nytros. The tunnels had been lengthened, deep lugged mountain tracks and enhanced fuel tanks were added to meet the journey.

The bottom line for competitors in this event is they see some of the most amazing countryside that exists in the world and the training and significant skills that are required to compete set you apart in the snowmobile world.

Having personally had an opportunity to participate in what is deemed to be the toughest cross-country snowmobile race – Iron Dog in Alaska, it may be interesting to see if Todd Palin, as the reigning champion, would like to challenge for what is undoubtedly the toughest, longest snowmobile event in Canada.

Cain’s Quest 2009 takes place in Labrador on March 14th, 2009. Visit www.cainsquest.com for all the details.