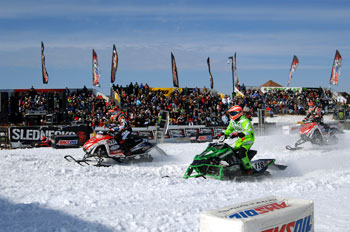 Bauerly and Mees Tangle, Opening the Door for Tremblay in Semi Pro; Gulla Pulls Away with Kaufman and Crapo in Tow in Pro Super Stock

Warm temperatures earlier in the week, followed by a freeze turned the already technical track at the Hayward 300 into one of the toughest challenges of the season as the AMSOIL Championship Snocross Series nears the end of the season.

A huge crowd was on hand for Saturday’s main event, and the finals didn’t disappoint as restarts and crashes played a roll as the year-end championship point battle tightens.

Semi-Pro Open proved to be the race of the day, as multiple crashes and a mid-race accident characterized the outcome. Dan Ebert (Arctic Cat) entered the race as the number one qualifier, followed by Paul Bauerly (Ski-doo) and Darrin Mees (Ski-doo). While Ebert grabbed the immediate lead, he soon began to fade and Paul Bauerly went to the front of the pack with Darrin Mees in second.

By mid-race it looked as if it was Bauerly’s race to win, but then the tide turned quickly as Paul crashed in a rutted turn and Darrin Mees slammed into him with a viscous “t-bone”. That opened the door for then third place rider Tim Tremblay (Ski-doo) from Ste Jeanne D’Arc, Quebec.

Tremblay had come oh-so-close to capturing his first National podium several times earlier in the season, and now the opportunity was upon him to capitalize. And capitalize he did with Dan Ebert following and the Swedish talent of Christian Salemark (Arctic Cat) in third as they crossed the line.

TJ Gulla Wins in Pro Super Stock; Kaufman Unable to Hunt Him Down

When the top guns on the AMSOIL Championship Snocross Series came to the line for the final race of the day, it was veteran rider Garth Kaufman (Arctic Cat) who held the number one qualifying position with TJ Gulla having the second pick at the line. However the start of the race was marred with a red-flag incident, which saw DJ Eckstrom (Polaris) unable to continue for the day due to a damaged race sled.

At the green for the second go-around, it was Gulla who shot out for the early lead, and one he would not relinquish. Following the Vermont rider was Kaufman in second and Shaun Crapo (Polaris) in third.

Further back, the point leader coming into the race, Levi LaVallee (Polaris), found himself mid-pack and dealing with a swarm of riders. Up front, Kaufman made several runs at Gulla but was unable to complete a pass. Crapo held fast to the third place position, and crossed the line 2-seconds behind Kaufman.

More importantly, the year-end point battle tightened dramatically when Levi was forced to pull of the track on lap 8 as his front suspension gave way. That put Kaufman in a dead tie with LaVallee for the year-end championship with one race to go. Just ten points behind them is Ryan Simons (Arctic Cat) and only one point behind Simons is Gulla. This spells a dual of epic proportions as the season concludes in Lake Geneva, March 20-22 with the Nielsen’s Grand Finale.

Supertrax Onlinehttps://new.supertraxmag.com
Check back frequently for new content and follow us on social media!
Previous articleCAIN’S QUEST: One of the World’s Toughest Races
Next articleTeam Arctic Takes Two in Hayward