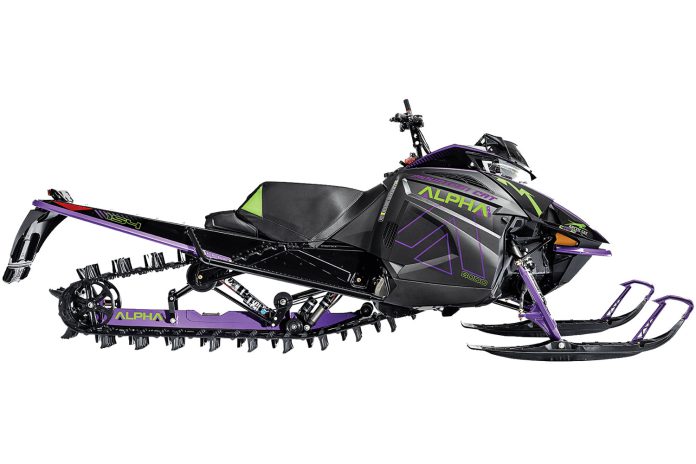 Arctic Cat has been working feverishly the past five years on its mountain program. Although the company has kept its own customers, it’s been a struggle to convert Polaris and Ski-Doo enthusiasts over to the brand.

Andy Beavis and the Arctic Cat deep snow engineering team have pared weight, streamlined suspension components so there’s little snow retention, relocated the chaincase and changed the angle of approach of the track. All these things worked and improved the M-series but nothing has made a significant dent in the competition. Not until now.

With the intro of the new Alpha One single beam skidframe, Cat may have made a quantum leap into the mindset of other-branded riders.

The Alpha skidframe goes with the principal that a deep snow skid doesn’t need two rails. Instead, there’s a single, extremely rigid rail running down the middle of the track allowing more turning flexibility from the track, quicker pivots, better sidehilling, reduced weight while still maintaining all the best of what the back of a mountain sled should do in powder.

Our mountain riders tested the Alpha One and walked away impressed. Even considering both Polaris and Ski-Doo have incredible mountain sleds with amazing technology, this one rang the bell.

Combine this tech with Cat’s very torquey, lightning responsive DSI 800 and the Alpha is a very solid contender in showrooms.

This is big progress and we believe it will turn a lot of heads in the vert market. Kudos to Cat for breaking through!

Now, listen to Mark’s feeble rebuttal on why no one else but Ski-Doo or Polaris can ever be a consideration in the mountains. Times change, buddy, and that’s what makes the snowmobile industry run!