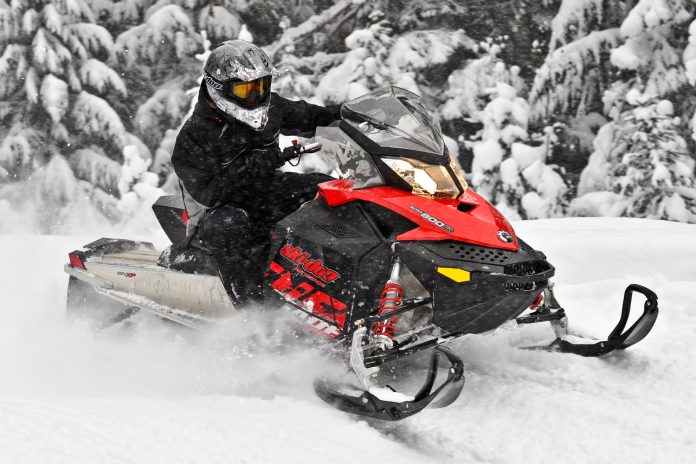 These second generation REV Renegades were really good, lightweight snowmobiles with impressive power-to-weight ratios with either a 600 or 800 Rotax E-TEC underhood and the 137-inch rMotion skid delivered an incomparable ride at that time. Handling was okay, but not world shaking.

Overall it would be hard to find a better used ride provided you locate a low mileage copy. Here’s what I mean specifically. The Series III 800cc, cylinder reed Rotax was a sweet runner with E-TEC induction. Everything remained good with this engine until the 10,000 klick or 6000 mile threshold was reached.

Once past this mileage tally the PTO (clutch) end of the crankshaft had a habit of spitting its bearings out of the cases. If you must go over the 10K/6M threshold then confine your search to the Series III 600 E-TEC or an 800 that has had a rebuild. The 600 has a much better rep at that age than the 800.

The use of a 16-wide track has mostly disappeared from today’s X-over market, however, the 16 x 136 Camo-sneaker used on this vintage of Renegade was highly effective. These Renegades could easily pop on top of six fresh inches on Kevlar Lake and deliver a ton of sno-mobility.

Keep in mind Ski-Doo has been number one in the biz for more than fifteen years. This means there should be a good supply of these desirable sleds for you to choose from when shopping for a 10-year-old ride.

I fully agree with Mark’s choice of the Renegade. These were great crossover sleds because they were so light and had the benefit of a 16-inch-wide track. Their shorter 137-inch length still had incredible floatation and really good off-trail handling because of the 137 track width compared to the competition using 141 and 144-inch tracks. Both the 600 and 800 E-TECs were strong running, reliable engines in both powder and on groomed trails.

There are lots of Rennies and 15×120-inch MX-Zs from this era still on the snow and you should have a good selection of used ones to choose from. Like Mark says, try to find one with less than 10,000 K on the odometer, if possible.