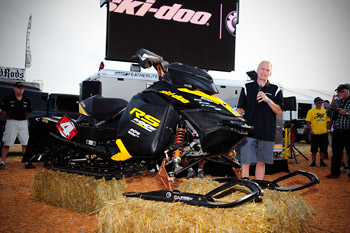 It was pretty interesting when the 2014 factory snocross racers were revealed back in September.

The most obvious change to them was they were all equipped with 128 and 129-inch tracks.

This jump from 120 and 121-inchers for race sleds may be a precursor to what will happen with production trail sleds, too.

It’s a fact that longer tracked sleds are now outselling the shorter ones and the price differential between a 120-121 and a 136-137-incher is almost negligible.

In almost every case, demand drives the industry and it’s pretty obvious the demand is for longer tracks on sleds.

However, there’s still a big following for the shorter tracked sleds that offer the optimum in lightness.

There may be more people who would buy a sled that jumped from, say, 120-inches to 129 than buyers who would want to go all the way to a 137.

Interestingly, the weight difference between the two track lengths (120 to 137) is only about 11 pounds. If you consider the jump from 120 to 129, the weight gain would be about 5-6 lbs. Not much to worry about there and we’ve found the handling diferences to be minimal (Example: Arctic Cat’s 129 versus the 137 ProCross).

The gain in flotation with a 129 would make a big difference in the MX-Z and we already know how much better a Switchback 137 rides compared to the RUSH with a 121. It would work great with a 129.

Then there’s traction: Think about a big gain in bite from a longer track without any handling compromise and a penalty of only about 6-lbs.

Not much of a decision, is it?

Kent Lester
Kent Lester is Co-Publisher of SUPERTRAX Magazine and a regular contributor to this website.
Previous articleWHAT WILL POLARIS DO IN 2015?
Next articleHOW MANY 2015 YAMAHAS WILL BE YAMAHAS?