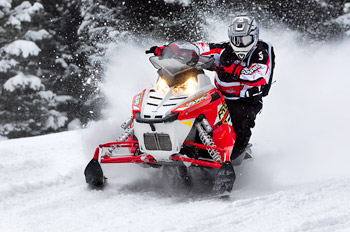 Believe it or not, in less than a month we’ll be getting a sneak peek at all the new 2015 sleds.

It’s kinda crazy because we’re just getting on the snow with the 2014s right now and are pretty impressed with what we’re seeing.

It’s safe for us to guess what will be coming from the OEMs right now. However, after the reveal dates we can’t tell you much until the dealers have had a chance to look at them. Everything will be top secret until the end of January – maybe longer.

Over the holidays we’ll be doing more guessing about what’s coming but right now we’re pretty interested to see what Polaris will have for 2015.

Fact is, the Polaris line-up is pretty tight, particularly with the new Indys (fan-cooled, utility models and the 800).

We don’t expect anything too radical in the mountain market either and the Switchback X-Overs have been pretty solid sellers, as is.

There are two areas we think Polaris may be moving toward with change this year. One is a bodywork change for the RUSH. Although new plastic and graphics isn’t a lot to get excited about, it will put the spotlight on the RUSH again when the excellent Indy 600 and 800s have been stealing a lot of focus.

The second area we think Polaris will be tapping is its engine line-up. We think Polaris has had a new 2-stroke in the wings for a few years and now that both Ski-Doo and Cat have introduced very high-tech, super-fuel-efficient 2-strokes, the brass at Polaris will finally reveal a blockbuster new engine format (likely a 600 this year).

Also, the engine program will include at least one new 4-stroke engine.

Polaris has been in denial for too long in the 4-stroke category and although the 750 Weber Turbo is one of our fave 4-strokes of all time, the company needs to get in the hunt and satisfy that particular 25-percent of the market.

Kent Lester
Kent Lester is Co-Publisher of SUPERTRAX Magazine and a regular contributor to this website.
Previous articlePolaris Gives Away 60 Sleds in 60 Days
Next articleARE SHORT TRACKED SLEDS FINISHED?