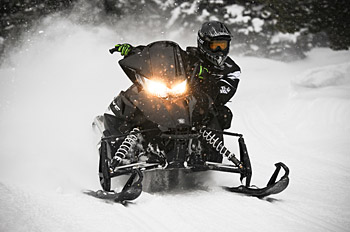 Considering the growing list of new snowmobile models being offered with tracks longer than 120-inches, you could argue the industry is swaying over to long tracked sleds.

We asked one of the OEM snowmobile engineers why this proliferation of longtracks exists and he surprised us with his answer. He told us it’s specifically about top speed. We were shocked because our team at Supertrax has never really been able to prove increased track length actually makes a sled go faster.

We’ve always been pretty obsessed with weight – or more specifically, the absence of it in snowmobiles and a longer track and skid can easily add thirty extra pounds of mass to a sled’s total.

If snowmobile performance is all about power-to-weight (and we believe it is), then the extra weight gained with additional track length appears to be a move in the wrong direction.

The engineer clarified the difference between top speed and acceleration: A longer track may allow a sled to reach a higher top end velocity than a shorter tracked version of the same thing but it may take the same or a longer amount of time to get to that top speed number. An interesting conclusion, and one he claimed is based on many hours of testing and timing by more than one snowmobile manufacturer.

In our experience however, the popularity of longer tracks is tied to a completely different rationale. Where we’re from, trails rule, riders are focused on destination-style riding and a longtrack offers the opportunity to venture off-trail.

With so many powder riding options it makes sense many riders here would welcome the advantage a longer shoe offers.

Another assertion is that a longer track bridges bumps and moguls better than a 120-121-inch length and, on trails, in stutter bumps and light chop, will provide a better ride than a shorter track.

This is true but not easy to prove. Unless you can hop back and forth between two snowmobiles on the same day on the same trail, you can argue pretty effectively that today’s advanced spring and shock calibration can accomplish the same ride results.

One inarguable fact is this: A longer track gives you more traction. Although that statement seems pretty obvious, the traction factor is a benefit not just in loose powder snow but also at high speeds on hard-packed and icy surfaces.

Track slippage is a major deal if you’re riding on frozen lakes and, even when a sled is fully clutched out at the top of its speedometer there’s still considerable slippage.

A larger bearing surface where the rubber meets the snow can marginally reduce that slippage and allow the sled to gain greater forward momentum. This especially holds true if traction studs are used and is another consideration when making comparisons.

For trail riders, we think versatility is the key. If there’s none or very little performance compromise, why not look for a sled with a bigger track surface?

Although you may pay a bit more, you’ll be able to do more with your sled. The option to go off-trail or ride in fresh-fallen snow can be a blast and only increases your enjoyment of the sport.