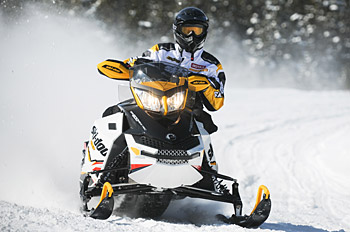 It’s tough to argue with Ski-Doo’s engine development strategy. Ski-Doo has virtually guaranteed the longevity of 2-stroke power in our industry.

We’ve had exposure to E-TEC for almost five years now and we continue to marvel at how good these engines start, idle and how little petroleum they use. The fact they are squeaky-emissions clean doesn’t even enter into it, as Ski-Doo says itself: The proof is in the riding.

Although XPs are very sharp handling, flat cornering sleds, compared to both the Cat and the Polaris, there’s an almost robotic numbness the driver is fed back through the bars. The sled handles with razor sharp accuracy until it gets to its limit and then can offer up some unpredictable ski-lift.

It’s not bad, it’s not uncontrollable in the least, but it’s there. Lift the throttle and it goes away. So the worst we’d have to say is the XP chassis requires some precise throttle control and some body-english to reach its maximum.

When you bolt in rMotion and start riding deep whoops and gnarl, the back end actually, noticeably outperforms the front end on the X.

Even with upgraded reservoir clickers up front the deep cycling the rMotion skid is capable of can cause the front end to “pack up”. This may be a bigger comment on the rising rate skid’s capabilities than the front end’s shortcomings though.

Throttle tip-in is as crisp as an Oreo and the MX-Z’s clutches spool up with smooth power delivery every time you squeeze the throttle.

Calibration is perfect. Much of this smoothness is due to the XP’s very light, rigid bulkhead design and it maintains very good clutch alignment, much like the Cat, by using chassis support to keep everything from twisting.

Overall, the smooth power delivery of the 600 and the prowess of the XP platform marry together to produce impressive acceleration and strong top end performance.