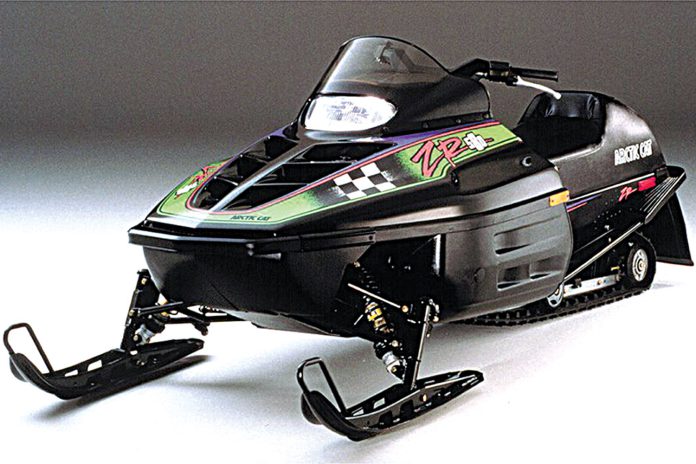 It defied reason. The bent-at-the-boot-stirrups double A-arm ZR 580 was the hands down best handling snowmobile we’d ever ridden up to that time.

Here’s the issue. Arctic Cat developed its sleds in the windswept ditches of Northern Minnesota, not the tight and twisty trails of Michigan’s UP.

How did Arctic Cat achieve handling prowess that quickly became the stuff of legend?

Here’s how: The ZR was built with one over-arching mantra: Keep the center of gravity low. The engine was hammered deep into the “rubber overshoe” tub-like belly pan.

The all-new A-frame IFS was tilted toward the bumps, a trick that would be copied over and over by the competition. The spindles moved up and back as much as up and down while the ZR cycled through bumps.

The skidframe was stuffed deep in the tunnel and looked like the running boards would bottom out. They did.

The sled was the first of two Arctic Cat models that year, the Thundercat being the other, to use a hydraulic brake. The first limited build 580’s and T-Cats used a single piston caliper and a floating disc that pounded the pads back into the caliper and made the first squeeze on the brake lever a life changing experience from a 100-mph pull down Kevlar Lake.

Two things those early ZR’s didn’t display was quality-of-finish or style. The ZR worked like a dream but some owners put two covers on the original 580 at night in case one blew off and the neighbors had to look at it.

How many sleds use A-arms today? All of them.