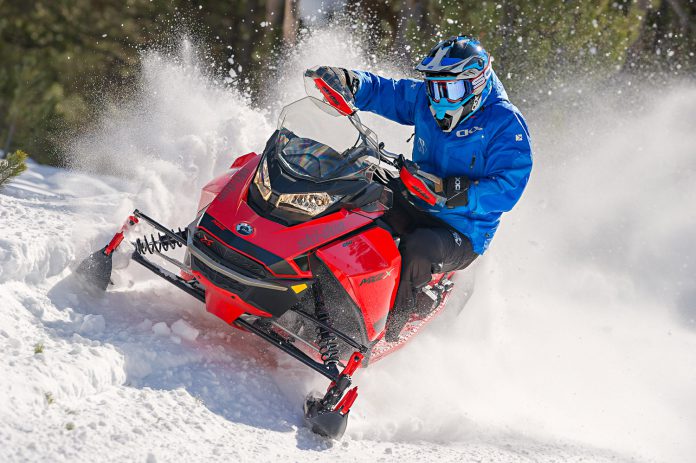 Its been a pretty busy couple weeks for powersports industry leader BRP. Only days ago the company announced the mothballing of the legendary Evinrude outboard engine brand.

THE REV AND THE PYRAMID

In 2002 Ski-Doo introduced a new snowmobile chassis design that literally changed the way a snowmobile was ridden. It’s design and ergonomics were referred to as “rider forward”. The new chassis configuration was unlike anything seen in the industry and closely mirrored the ergonomic orientation of an off-road motorcycle.

A large portion of the re-configuring of the chassis was rooted in what is called a “pyramidal frame”. Because the rider is oriented forward on the REV chassis (compared to all conventional snowmobiles before it) a new over-structure had to be developed to increase frame stiffness while accommodating a radically re-positioned rider’s perch.

BRP applied for and was granted patents surrounding, not only the pyramidal frame, but many other aspects of what is referred to as the “REV” platform.

In 2008 and later in 2012, Arctic Cat introduced snowmobiles using what looked very similar to a pyramidal frame. We will not argue if this was or wasn’t an infringement on Ski-Doo’s patents.

The issue has been litigated in both the US and Canada on more than one occasion and from what we hear, Arctic Cat won the issue against Ski-Doo’s assertion of infringement in the US and in Canada earlier this decade.

As of this week and beginning in July this year Arctic Cat is not only forbidden to sell but in some cryptic way is not allowed to use any snowmobiles affected by the award granted from the Canadian Federal Court.

Does this mean Arctic Cat snowmobile owners are contravening some legal statute when they head out for a ride this coming winter? Dunno.

SHOW THEM THE MONEY

On top of this ruling is an order for Arctic Cat (Textron) to pay BRP $135.00 for each and every Arctic Cat snowmobile manufactured since 2008 using the pyramidal frame design. Get out your calculator. That’s a big number in our world but maybe not so much in the corporate realm.

If you assume there have potentially been 100,000 Arctic Cat sleds built since 2008 using the pyramidal frame design, the number is not chicken feed (Cat food?). Here’s one number I guarantee is large in anyone’s world: The legal costs incurred by both parties to launch and to defend this action.

There are some profoundly intriguing questions surrounding this issue. First, the ruling is only enforceable in Canada. Does this mean Arctic Cat must stop selling sleds in Canada until a deal is struck with BRP? A deal? Yes, a deal. We haven’t heard a fat lady singing so look for something which sounds like a compromise.

Sea-Doo lost a watercraft patent suit (seriously, a decades old watercraft patent) with Arctic Cat some time ago. It amounted to tens of millions of dollars being owed to Arctic Cat. We wonder – is that number still on the “accounts receivable” chart at Arctic Cat?

WILL THIS IMPACT YAMAHA

Wouldn’t you like to be a fly on the wall at Yamaha’s snowmobile division HQ in Markham, Ontario, Canada? Will there be implications for Yamaha as a result of the use of the same pyramidal frame design in play on virtually all the sleds Arctic Cat builds for Yamaha? As of this writing there is no mention of Yamaha in this action. We think that’s good.

One might wonder what Textron is thinking about this jackpot. Even if the award and ruling is negotiated down there’s still staggering legal costs that often dwarf the actual settlement numbers. Textron has had to navigate this issue without ever being involved in the actual design of these sleds.

Here’s one more. Arctic Cat is no doubt working on the next generation of its ProCross chassis to take to market in the not too distant future. If this is true we can’t help but wonder if any new and under-wraps designs have continued to use the pyramidal frame design.

We don’t know the answers to most of these questions but you can be sure somebody does. Stay tuned.