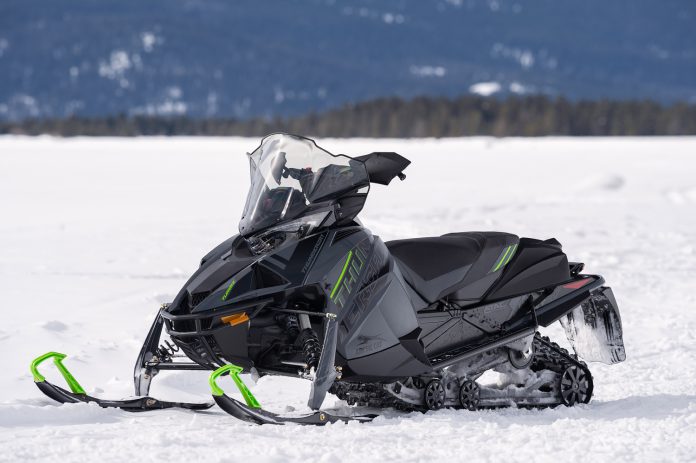 When it comes to remote, from-the-handlebars, suspension adjustment you basically have two choices.

Over a decade ago Ski-Doo came with a mass-produced remote adjustment feature called Air Ride. This system has always used an onboard mini-compressor to alter the air pressure in a bladder inside the rear track shock. The rider adjusts a toggle switch on the left hand side of the handlebars to determine how much pressure is to be built up or released as required.

As pressure is increased, the air suspension becomes more resistant to collapsing. The effect is equivalent to having multiple springs available to soften or firm up the back end of your sled. However, there are no coilover springs surrounding the shock but there are torsion springs at play. Likewise, the air shock can be softened for one rider or less luggage by using the same handlebar toggle control to bleed pressure.

Air Ride is especially effective on touring sleds where an extra passenger may be onboard or significantly heavy luggage or gear is added to the back of the sled. Air Ride does not make a detectable difference to either compression or rebound dampening but it does tend to limit the bounciness of the back end of the sled with dampening features built into the rear shock. The response time with Air Ride is very quick and it is infinitely variable within the parameters the system allows.

Air Ride can be effective on a medium performance trail sled like the Renegade Enduro but is actually more commonly used on 2-up models like the Grand Touring or Expedition.

With either the Yamaha or the Arctic Cat systems, the rider can adjust the damping from a control switch on the left side of the handlebars. Since these two remote systems are paired with Fox QS3 shocks, there are three damping settings: Soft, Medium and Firm and the ride difference between those settings is significant.

Not only is the remote feature easy to use but the time response from when the rider presses the toggle to when the damping change actually occurs is a millisecond. The rider can set up for a gnarly corner and – at the last instant – and at any speed, get the rear shock to adjust to a firmer setting, fast.

With iQS and ATAC there is no change to the spring rate of the skidframe’s rear shock (conventional torsion springs are in place). Yes, it can be used to make an extra passenger more comfortable or when adding cargo weight by increasing the damping setting but neither iQS nor ATAC is available on a 2-up sled… yet.

To label one system better than the other is kinda missing the point. The real point, although these two remote-adjust features are fun and functional, is that it all depends on how you want to ride – and what kind of sled you prefer.

If it is damping adjustment you want, it’s ATAC and iQs. If it’s 2-up comfort and hauling, you want Air Ride!