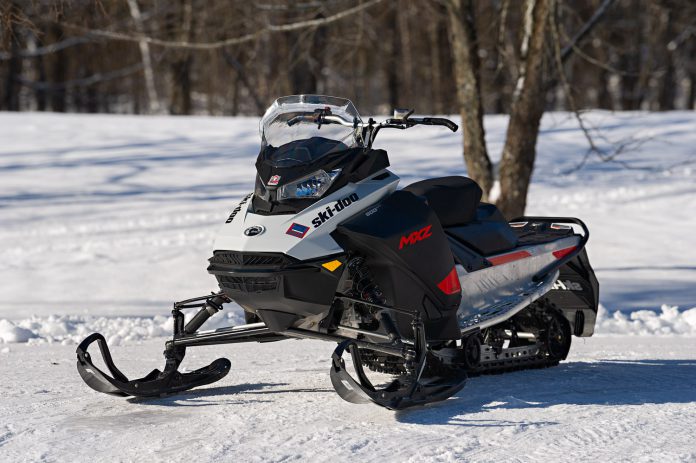 Some performance riders may be inclined to look down their noses at a 600 2-stroke sled that produces 85-hp; but after riding the MX-Z Sport some miles this winter it wouldn’t be us.

Sure, we’ve gotten used to 600 cube sleds that generate 110 or more ponies these days but competition-exceeding power wasn’t Ski-Doo’s intended purpose with this one.

What the engineering department was challenged to do was build a fully equipped snowmobile that could be delivered at an industry-low price. Oh, and one more thing: It had to avoid being boring. That means it needed to have good handling, a decent ride and enough power to hold the rider’s attention.

Did they get it right?

Based on our experience riding it this year, we have to say the 600 EFI Sport package is a homerun!

We honestly had to keep reminding ourselves this sled sells for thousands less than pretty much any other similarly equipped 600. Keep in mind, the Sport is a surprisingly well featured snowmobile. Built on Ski-Doo’s most up-to-date platform, the G4, and loaded with electric start, reverse, EFI, a nice digital display and a 129-inch track with 1.25-inch lugs, this sled pretty much has everything you could ask for.

Sure, we could tell you this is a snowmobile your wife or teenage offspring will love – and they will – but we can’t help but think the hardcore riders with keys to the garage will be sneaking a few rides on this sled this winter, too.

Why? Because this sled is all-out entertaining to ride – especially on trails. Frankly, 85 horsepower is enough to deliver trail satisfaction – even if you’re riding with more powerful sleds.

We were shocked at how snappy this EFI engine was. There are no exhaust valves and it’s really a pretty simple 2-stroke but its throttle response is excellent and it gets out of the hole quick and continues with surprisingly good mid-range power.

Yes, power drops off pretty significantly at about 80-per but you’ll rarely go that fast on any trail (or shouldn’t be) and even on the lakes it won’t lose sight of your riding buddies.

Frankly, we weren’t expecting this much engine performance, but Ski-Doo has fine-tuned this engine and clutched it so it always feels like it’s right in the meat of its power band. The EFI mapping delivers very crisp power, easy starting and… the 600 makes so little smoke we had to keep checking to make sure there was oil in the injector tank.

Yes, we’re raving about it but we also know you’re asking if there’s anything we’d change about the Sport. We’re digging deep here and probably going contrary to Ski-Doo’s conceptualization of what this sled is intended to be but… the SC-5 skidframe would be so much better if it was coupled.

We remember how well this skid worked before the days of rMotion and it was truly at the top of the heap back then. rMotion was an improvement on something that worked more than just adequately in the last couple of years the SC-5 was used in MX-Zs and Rennies.

Maybe there’s a way buyers looking for more plush can raid the parts department and buy coupler blocks for the Sport. Dunno – but it’s about the only thing we can think of to improve what Ski-Doo is delivering at a rock-bottom price.

As it sits, this is an incredible value snowmobile – maybe the best in decades – and we would guarantee those who have been able to find one this year are super smiley-faced.

Kent Lester
Kent Lester is Co-Publisher of SUPERTRAX Magazine and a regular contributor to this website.
Previous articleSnowmobiling in New York: Hamilton County / Adirondacks
Next articleAIR RIDE OR REMOTE DAMPING?