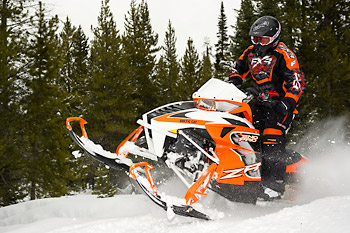 It’s been over ten years since the first mass production 4-stroke snowmobiles arrived and the game has changed considerably in that time.

Perhaps the biggest issue is how well 4-stroke engines have gained acceptance in the snowmobile marketplace against the long-entrenched 2-stroke.

Many who would never have entertained owning a 4-stroke in the mid- 2000’s are looking at them long and hard now.

Certainly, there are distinct advantages to 2-strokes such as lightness and efficiency and the OEMs have done an incredible job of perfecting semi-direct and direct injection systems to keep the performance high and the emissions low.

However, the average snowmobiler seems to be much more open to the idea of owning a 4-stroke than they were even five years ago.

One of the reasons for this has to be the track record of reliability these engines have delivered over the past decade.

Fact: Stock sleds with 4-strokes that have had decent owner-care tend to be in about the same running shape as they were when they were new.

Even those ones with extremely high miles tend to be running strong and performing well. Hate to say it but high mileage 2-strokes just don’t have the same durability record.

Resale has also been super strong on used 4-strokes and prospective buyers tend to be more willing to risk money on a used one than on a 2-stroke.

We think snowmobiling is all about fun and less about the practical considerations but lets face it, this is an expensive activity.

If you can get strong performance, decent handling and good gas mileage, it just makes sense riders are going to look at 4-strokes long and hard.

Right now the market is about 25-percent 4-stroke. Pretty soon the naysayers are going to have to pay attention and give 4-strokes the credit they deserve.

Kent Lester
Kent Lester is Co-Publisher of SUPERTRAX Magazine and a regular contributor to this website.
Previous article2014 INDY 800 WILL SURPRISE YOU!
Next articleYAMAHA & CAT: SO WHAT’S THE BIG DEAL?