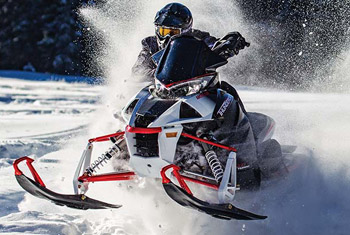 Without question, the biggest news from Arctic Cat this model year is the new 9000 series of turbos.

First, the details on the new triple: This mill, from outward appearances, looks like the steadfast 1049 used in the Cat 7000. It’s true, some of its design facets are based on that engine, however, it now displaces 1000ccs and has a balance shaft.

Power output is a claimed 180-stallions and after riding it for a week, we believe it.

The engineers actually lowered compression to 9:1 and dished out the crowns of the pistons to accommodate the turbo’s voluminous air flow. It uses three throttle bodies, an intercooler and has a nifty cast exhaust manifold routing between the Yamaha-developed turbocharger and its necessary plumbing. Open up the hood panels and this baby is loaded with shiny pieces and offers not much of a view of the engine itself – a pretty amazing job of packaging.

Combined with the new engine and Cat’s new-last-year TEAM primary and secondary, the 9000s rock. The flagship model is the ThunderCat – a 137-inch tracked beast that can haul the mail, and do it with a velvet-smooth demeanor.

In fact, the most impressive result of the new turbo engine is its driveability. These sleds, along with improved suspension calibrations this year offer linear, predictable handling and, totally unlike the former 9000, are not plagued with laggy, sudden power delivery.

We won’t spend much time discussing the new 9000 bodywork – we’ll let the photos tell the story – but suffice it to say, airflow has been a priority. We love the new look and we’re totally impressed with this sled.

We think there’s tremendous motivation for former Cat Turbo owners to move into this gentle-giant-carrying an AK-47’s turf.

We’ll give you more details on the other new Cats tomorrow.