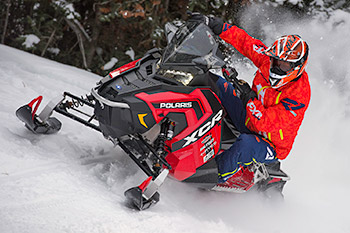 At first glance, the 2017 Polaris model line may be identified for what isn’t new. Huh? There’s no new engines, no new chassis platforms, no 4-stroke and no Indy 800.

THE 2017 Switchback Assault 144 is way more than just a parts bin update using a combo of the former SW 144’s parts and stirring in the AXYS front end. The calibration team has worked wonders with this sled’s handling and suspension and you simply cannot believe how good it rides now. Note we did not say, “how good it rides for an uncoupled skidframe”. Nope, we’d put this sled’s ride right on par with some of the best coupled suspensions in the biz.

Oh, and deep snow performance has been improved in about a dozen ways too, so it truly acts like a full bore crossover, dual purpose ride.

Polaris started with the Pro S (not the Pro X) and proceeded to rework nearly every area of the chassis for stronger off-trail results: Rails are reinforced as are skidframe suspension arms.

There’s a new, larger front track shock. The front end’s Walker Evans have been recalibrated and feature rebound damping clickers. A huge drilled brake disc is used and a 1.5-inch track is featured. Rugged, solid idler wheels are used all around. Apparently all the parts used are right out of Polaris’ own race shop, so it goes without saying, this sled is suited for racing, pretty much right out of the box.

The utility-targeted VOYAGEUR 600 has been heavily revamped and now uses the AXYS front clip in combo with a reworked shock-in-skid tunnel and skidframe.

There are no more Pro-Ride based RMKs in the mountain segment. All models are now using AXYS technology, including the all-new Pro RMK 174. This ultra-long vert sled has had many revisions made and was not just a tack-on of a longer track and skidframe to the former 162. The tunnel geometry where the tunnel meets the front bulkhead was radically reworked to accommodate the extra length so the sled would climb-out better and get on top quicker, at the same time without sacrificing deep snow maneuverability.