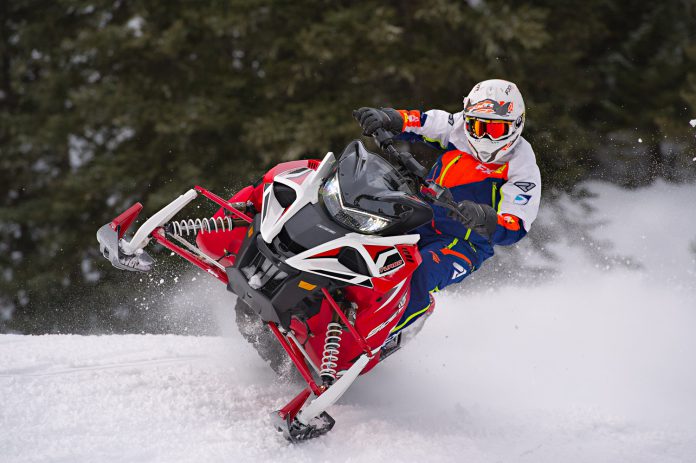 Supertrax had a chance to put some good miles on various versions of Yamaha’s new Sidewinder a week ago and came away impressed – not just with the new turbocharged sled but with Yamaha’s formerly quiet business demeanor now replaced with a genuine go-for-it mentality. Horsepower is now officially king at Yamaha.

Regardless of which track length you choose, the Sidewinder rocks. There’s a claimed 180-ponies in the corral and this sled feels like it every time you dip into the throttle. The power comes on low and never feels laggy as it accelerates voraciously up to its redline.

In fact, to compliment the roller, Yamaha is also using a new version of its stellar YXRC primary clutch. We didn’t hear much about it (still in final calibration) but we suspect it will be physically larger and beefier to handle the excessive horsepower of this bullet. We heard it will be called the YSRC but will confirm later.

In the conditions we rode, we got to sample how the sled handles in hard, frozen conditions and in powder snow. We liked the handling in the loose stuff better but found suspension calibrations to be very good in all models. Yamaha has definitely taken a step up in this department with all of its sleds this year.

Also, many Viper models are now using Fox QS-3, 3-position shocks up front in lieu of air shocks. We love this trend and it has made a world of difference not only to how these sleds ride but also in how they handle.