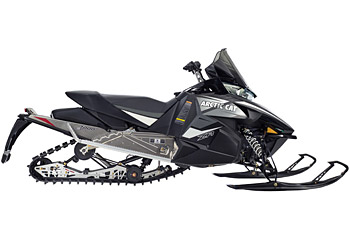 Arctic Cat has increased its Yamaha engine-sharing deal beyond the 120cc 4-stroke level to include Yamaha’s legendary, and maybe the best all-round 4-stroke mill in the biz, 1049cc, 3-cylinder triple.

The Yamaha EFI engine has been nicely shoehorned into the current ProCross bulkhead with a new front mounted airbox and an under-seat gas tank, “U” shaped header pipe that’s vented into the tunnel and turning exhaust gases back toward a right-side engine bay (traditional) mounted silencer.

We know, it’s a lot to absorb and we were somewhat overwhelmed with this move. Here’s some info to help you understand this. The 1049cc Yamaha triple is actually 12 pounds lighter than the current 1056cc Suzuki twin. Nice.

Arctic Cat is offering the engine in a variety of chassis configurations including 128, 137 and 141-inch variants.

The new sleds equipped with this engine will be called 7000 series Arctic Cats.

Kent Lester
Previous articleWHAT’S ARCTIC CAT UP TO FOR 2014?
Next articleIS POLARIS GIVING UP ON 4-STROKES?