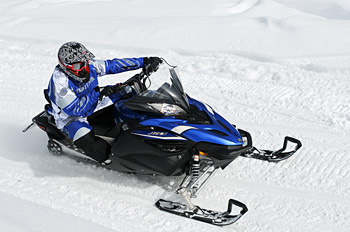 Yamaha made some revolutionary changes to the Apex last year and transformed it from a quirky handler into a groomed trail wonder.

Most obvious was the introduction of electrically assisted power steering (EPS) to the snowmobile marketplace.

However, there was more to the Apex than just one mind-bending new techno-trick. Geometry changes up front and new, reduced darting skis made a big difference, too, and might have had more influence on handling than EPS.

Along with the handling improvement came a shift to a 128-inch track – a feature that could have increased steering and darting problems on the original Apex. But the longer track and additional traction married to the front end tweaks made the Apex a completely new snowmobile. The engineers weren’t done yet, though.

Someone at Yamaha knew there was more power to be wrung from that 998cc 4-cylinder 4-stroke under the hood and the addition of an exhaust control device called EXUP boosted the power over 160 ponies and added even more bottom end torque.

Not only was the upgrade noticeable, combined with the suspension and chassis improvements added in 2011, it breathed new life into the Apex brand.

The question may be, is the Apex still a viable hyper performance choice? Depending on where and how you ride it, we would say absolutely, yes.

Without question, the Apex is a heavier sled than it was in 2010. However, its ride results and overall agility are perfect for riding groomed trails – especially on long trips.

You can undertake globe-trotting distances with this sled, and even if the trails are less than ideal, be assured you’ll be comfortable and pain-free at the end of the day.

Along the way, you’ll dip into the Apex’s considerable power and be impressed with the smoothness and lightning-quick response from that amazing mill you’re throttling.

It plays a soundtrack like no other sled can. Four cylinders screaming through those rear-exiting pipes is one of the sweetest sounds a gearhead can experience and it only gets better as the RPMs increase.

Perhaps the Apex’s biggest asset is something you can’t touch or feel in the showroom. This snowmobile has an unbelievable record for durability and trouble-free mechanicals.

If rudimentary maintenance is followed, this sled has a history of lasting for years and then delivering near-ridiculous resale when it’s time to move on.