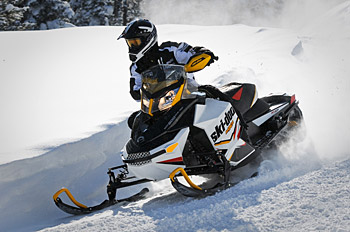 The fact rMotion is at its very best with the throttle wicked in deep stuff belies the fact it also performs incredibly well at trail speeds.

Although Ski-Doo will tell you rMotion’s rising rate design’s most important benefit is its resistance to bottoming, we feel it provides a level of plushness that precisely suits riders shopping this category.

Despite the fact it’s being targeted at hardcore ditch riders, this suspension gives up none of the SC-5’s compliance.

Unless it’s never been explained, the term “rising rate” doesn’t mean much to the average rider. In fact, most snowmobile suspensions today are “falling rate” designs and that means as compression speed increases because you just hit a big sucker bump causing the slide rail to compress further up into its travel, shock dampening and mechanical leverage actually decreases.

This sounds like it could be catastrophic and cause incredible bottoming impact. That’s exactly what would happen if the acceleration of the rail continued at the same rate through the entire arc of its travel.

By various means, usually through front and rear arm coupling which spreads the damping resistance over the whole skid, by using dual rate springs (coilover systems only), by using urethane shock snubbers and by allowing the rate the skid is moving to decrease just before maximum suspension travel is reached, harsh bottoming is avoided.

With rMotion, Ski-Doo has played with the skid’s geometry, utilizing an extremely long front arm and separating the springs’ and shocks’ ratios so there’s less shock dampening at the beginning of the skid’s travel and increasing it as rail speeds move faster.

If you check out the rate of the shocks on a graph, Ski-Doo claims the actual amount of damping at full compression is 2.3 times more than it is at the beginning. At the same time, the torsion springs are actually falling in rate as travel is used up, allowing the shocks and the huge accelerator cam between the front and rear arm to do their jobs.

Since the springs are falling rate, the engineers have been able to use softer spring rates and this is what keeps the ride so good at trail speeds.

A big benefit of this design is that the rMotion gains a half-inch of travel (15.5-inches) without increasing the overall ride height of the sled. This skid can now fully collapse right to the running boards when full suspension compression is reached.

Keep in mind, you’re dealing with rising rate, so a bottoming impact is less likely to occur at the extreme end of the skid’s travel.