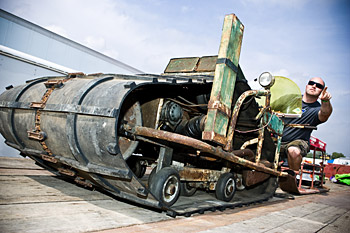 Seems there’s a double standard for noise in some areas of the North American snowbelt and here’s what I mean.

Ontario, Canada one of the top three markets for new sled sales in North America, is enforcing laws passed under its Motorized Snow Vehicle Act which provides fines for modifying any snowmobile exhaust system in any way, period.

Last winter I witnessed police officers spending serious time at ride checks lifting hoods in an effort to discern if everything was stock. I have issues with this behavior as I have on occasion had to look hard to verify if an exhaust system is stock or not.

Okay, I’m not for noisy snowmobiles and I appreciate the fact sleds today are exceptionally quiet, stock, out-of-the-box. I’m not proposing Ontario is wrong with this stance although I strongly suspect it’s being used to increase revenue more than decrease noise. However, something is wrong with our sport being pigeon-holed with this kind of intrusive enforcement.

Let me reveal my rationale here and explain why I’m ticked off. Last summer my wife and I were having dinner on a patio outside a restaurant located on a busy waterway. There were hundreds of people nearby and dozens of boats in a very confined area. I love this kind of place. Generally, the closer I can get to anything with a motor, the happier I am.

While I’m plowing back grilled chicken, a 30-foot Cat sporting twin 454s equipped with GMC superchargers and dual quads (times two) chugs up the narrow channel. Everyone is looking. The captain, after clearing the channel markers lets her go. The decibel level is nothing short of heroic. Wu-hoo!

This NHRA caliber auditory experience shook the teeth of no less than 125 people, mine included. Police did not dash out and chase the boat (not that they would have had a chance to catch the thing) and as far as I know there’s no law restricting this Grammy Award winning cacophony.

There’s more. I’m sitting in my relatively loud but stock Super Duty F250 diesel at a stop light when up next to me rolls one of Milwaukee’s finest motorcycles. It’s equipped with what appears to be straight pipes with no, zero, nada silencers whatsoever.

I remember reading somewhere the majority of domestically-built V-twins leave the dealer with aftermarket (read: loud) pipes. I have no way of verifying that estimate but I’m inclined to suspect it’s not far from the truth.

Back to the stoplight. The substantially overnourished wannabe outlaw is clearly enjoying the throbbing rumble and for the most part, I kinda like it, too.

When the light went green the V-twin shook the pilot’s impressive beer gut while rattling everything in my truck. Again, I’m not upset but I would estimate there were easily 250 people within earshot of this Kennedy Space launch dimension racket.

Are you getting where I’m going? Snow-mobiles are operated, for the most part, way out in God’s beautiful creation, far away from crowds. Even when snowmobiles come close to residential areas it’s in the winter and windows are shut tight. So how come snowmobiling is getting slammed with discriminatory enforcement on exhaust systems? It doesn’t make sense.

In other jurisdictions in the US and Canada, local ordinances have been adopted regulating snowmobile exhaust noise. I looked into a few and found it odd the level of intolerance people have for snowmobiles when these same jurisdictions are exposed to motorcycle straight pipes for three times as many months annually as they are snowmobile noise. Moreover, what percentage of sleds have modified exhausts versus V-twin cruiser and bullet bikes? Again, seems odd to me.

There will be a bunch of our readers who’ll think this is a pretty risky commentary, however, I want to underscore I’m not bucking noise restrictions for snowmobiles.

I want to make this 100-percent clear, there is something wrong with our industry being subjected to this kind of unfair scrutiny when motorcycle, marine and automobile noise limits are routinely overlooked and in many jurisdictions are un-enforced and tolerated.

Finally, I think there’s a more reasonable position for Ontario as it attempts to completely eliminate exhaust modifications. I think enforcing a reasonable decibel level consistent with what many aftermarket systems produce is palatable to the masses. I also think straight triple pipes with “glass pack” silencers are idiotic.

There’s middle ground here somewhere. I’m sure of it.