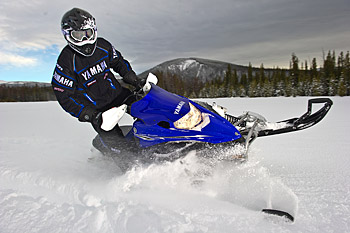 “We are excited to bring this special sled to market just in time for the season,” said Yamaha Snowmobile Product Manager Rob Powers.

“I had the opportunity to personally put this model through its paces last winter,” Powers continued. “I thought it was awesome on the trail, with great traction for accelerating but it also had just enough side slip to let the sled corner well. The deeper lugs also give this Nytro XTX better deep snow performance than the original 1.25-inch model. This sled is easily the most versatile model we have in the lineup.”

There will be a very limited number of units available to consumers near the end of December, 2011.