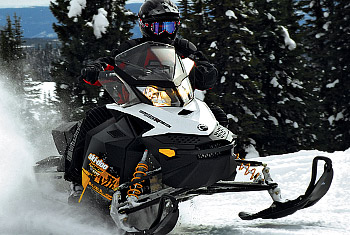 Brothers and Co-Publishers of Supertrax – Kent and Mark Lester are debating their picks for 2011’s Best In Class awards.

To say the 800 E-TEC was the “most awaited” new sled is not really accurate. Truth is, Ski-Doo actually lost sales last year when it held up the intro of the big block E-TEC knowing full well the delay would “unsell” a bunch of PowerTEK 800s already on order if the sheets came off the direct-injected 800 last fall.

So, this year we have the real thing. The most sophisticated, most efficient and one of the most powerful 800 2-strokes ever built, available to those (and only those) who early ordered one last spring.

I can’t believe Kent will actually attempt to respond to my incredibly logical and honestly, ridiculously obvious pick here for best 150-horsepower sled. Sure, the new Apex has EPS but everyone is wondering where the MSRP came from and why, after a mega-buck re-tooling of the entire bodywork package, the sled doesn’t look any different.

Look, Kenny, E- TEC is what snowmobilers want. It answers all the issues associated with 4-stroke weight and 4-stroke emissions.

No 4-stroke will ever be this light and produce over 150 ponies. The engine starts like a dream, idles electric-motor-smooth and literally sips fuel.

Add in this reality: The XP chassis with an E-TEC 800 ends up being the fastest non-turbocharged 2011 snowmobile. No contest, Kent. Why bother trying to counter this worthy selection?

Mark, how short your memory is. Last year you were all over the Apex as best in this class and argued things like reliability and belt life in a class where performance and performance alone is king.

This year you’re telling us, despite the fact Yamaha made enormous improvements to an already great snowmobile, the same old Ski-Doo XP with an improved 800 knocks it off the podium.

I think your problem actually stems from early childhood but more than that, when it comes to snowmobiles, you see yourself as some kind of senior version of Tucker Hibbert.

The average performance customer doesn’t care two hoots about EPA certification or even if the sled smokes a bit. That buyer cares about one thing only – getting to the end of the lake first.

Moreover, that same person wants to be able to do it over and over and know his sled won’t turn into a bag of junk after two years. The jury is out on the 800 E-TEC. Is it reliable? Will it hold up?

There’s only one sled that’s proven itself here and that sled is the rock-reliable 4-stroke Apex.