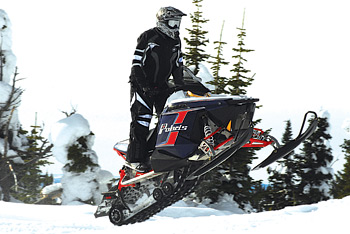 Now that all the hype has settled down and we’ve had a good look at the RUSH for a full season, we’re prepared to endorse it fully…and then some.

Our first year riding the actual production version of this groundbreaking sled was filled with fresh revelations. Yes, the rear suspension not only looks different but is a completely new way of thinking about the way a snowmobile handles terrain.

Frankly, when you’re seated on the RUSH you can’t tell if there’s any difference between it and every other shock-in-skid snowmobile built today.

The suspension doesn’t wow you until you realize this new concept is in its very earliest infancy. This was made even clearer when we rode the 2011 and sampled the updates and upgrades the Polaris engineers had made in just one year.

More impressive than any of this is the sled’s great handling. The adjective ‘great’ falls short when you actually get some seat time on a RUSH.

Its telepathic way of communicating the driver’s inputs to the trail is nothing short of spectacular.

You can reel in the tightest corners and rail through stutters like Ross Martin on this sled and rarely experience bottoming or hard impacts up through the suspension.

The RUSH’s ergonomics and rider comfort are a new standard and if you take advantage of Polaris’ option to select your own windshield height, this sled is as warm and cozy as sitting on Pam Andersons’s lap.

The new version of the 2-injector per cylinder Cleanfire is a quick revving, responsive 600 mill that delivers very good mileage and excellent power at every level. It already meets 2012 EPA emissions standards and represents the latest 2-stroke tech from Polaris.

The unspoken benefit of owning this sled is the instant rock star status you gain wherever and whenever you show up.

Its sizzle factor is sky-high and, deep down, isn’t that what we all want? You rarely get it packaged together in a sled as good as all this.

Honestly, I’m already weary of correcting you, Kent and we just got started.

First, the image of sitting in Pam Anderson’s lap is really wrong. Think about that, you may want to perform some edits.

Next, overlooking what is clearly the most revolutionary powerplant to hit the sno-mo-biz since the early 70’s: the DI 600 E-TEC, is colossally misguided. Ski-Doo is the leader in engine technology in the snowmobile industry, hands down, running away.

The 600 E-TEC simply overshadows every other sled in the 600 class based on its incredible power, drive-ability and stellar fuel mileage.

If that isn’t enough to win this BIC, what about the fact the TNT version of the XP is so light you have to tie it down in a snowstorm?

Kent, remember, light is right. Sure, the Rush gets the eye candy award and there’s definitely sizzle in the Pro-Ride suspension, however, Ski-Doo is already out front in the 600 class with the XP and E-TEC power.