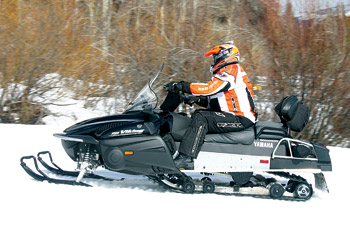 Although its name qualifies it as a purely utilitarian snowmobile, until you’ve ridden it, you can’t appreciate how good the Viking performs as a snowmobile. It’s the grand-daddy of this new breed of Utility-Tourers and Yamaha deserves credit for being the first to deliver a utility sled with all the goods.

When we first rode the Viking Professional we couldn’t believe how fast it was and how well it handled. One of our staff riders recalls a dinner conversation with the engineer who was originally in charge of the project and he voiced his last minute doubts about “maybe making the sled too fast”. He was considering taking some of the power out of the prototype’s 1000cc 4-stroke and we violently disagreed.

We had just spent the afternoon riding some pretty hot 4-stroke Yamahas and we couldn’t help singling out the Viking. We loved it. Fortunately, when it came time to roll the assembly lines, Yamaha didn’t change it.

The 2009 version is pretty much a ditto of former models but, since the beginning, it really hasn’t needed much of a change. Its carbureted 4-stroke triple was pirated from the original RS Vector and provides the absolute best blend of torque and power for touring.

It uses a typical Yamaha CVT clutch setup but adds a sub-transmission with high, low, neutral and reverse. You may think low range is unnecessary… until it’s time to pull your buddy’s pickup out of the ditch or when you have to tow an injured sled for 20 miles. This is a feature most snowmobilers have had little experience using but believe us, it can be really, really handy sometimes.

Everything drives through a 156-inch long track and that track is 20-inches wide! Not only is this a huge shoe but it has 1.25-inch lugs – enough to surprise you with its bite. With this much track under it, you’d expect the Vike to be hard to steer, especially at low speeds. It actually gets down the trail incredibly well, even on hard packed surfaces.

Once underway, it takes a set and hunkers down like only a truly heavy snow vehicle can. There’s no such thing as twitchiness or darting; it tracks as firmly as an anvil on a foam mattress.

In deep snow the Vike floats up on top like a mountain sled and, as long as you keep the power going, its gi-normous track will dig you out and keep clawing to the surface. In bottomless stuff, it will get bogged down if you scrub off too much speed, but you’d be surprised how it can get through conditions some smaller sleds can’t.

Amazingly, there’s 11.5-inches of travel back there and its flip-up, articulating slide rail design guarantees plenty of track will always be on the snow, especially when you switch to reverse.

With huge underseat storage capacity, a jumbo cargo rack and room at the back of the seat for extra bags, you can load up big-time and carry an extra passenger, too. The Viking won’t even notice the extra weight.