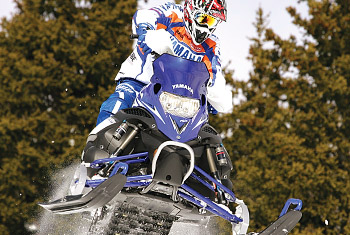 Not to knock its chassis; foundationally, however, the best part of the Nytro is its engine. Yamaha hasn’t altered the blueprint for this amazing EFI Genesis 5-valve, twin cammer since it was first introduced three years ago.

Its power is as deep and wide as Lake Superior and no one, no one ever to our knowledge has ever complained about it lacking. Yamaha claims 130 stallions. We say more – at least, in the seat of the pants it feels like more.

The combination of 4-stroke torque, flawless EFI performance and arm stretching power has always gone beyond being impressive with this motor. Furthermore, it’s rear exiting exhaust produces one of the best sounds in the biz.

We’ve long-term ridden several Nytros with this engine and every single one has exceeded expectations for consistent performance and particularly, reliability. Yamaha uses the same engine, with the same performance specifications from its base Nytro right up to the racer wannabe RTX SE.

An ‘anti-engine braking’ feature has been added that makes this engine feel like it’s a 2-stroke when you back out of the throttle. Basically, a small valve apparatus allows air to enter the EFI system when the throttle is released and instead of the 4-stroke “pitch you over the handlebars” feeling on slowdown, you freewheel and can use the brakes to scrub speed – just like a 2-stroke.

Yamaha’s design team worked hard to centralize the Nytro’s mass. Moving all the heavy components, including the driver, as close as possible to the middle of the chassis was tricky. Also, to counter the top-heaviness of a 4-stroke engine, the team altered the weight of every component mounted in the upper half of the platform.

In order to pare milligrams even the mounting hardware for the headlight and gauge pod is made of plastic composite instead of metal, plus the engine is laid back several degrees to place more weight both rearward and downward.